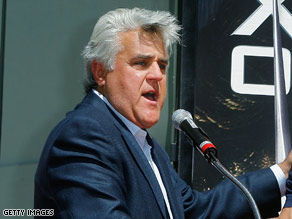 NBC cancels tapings of "The Tonight Show with Jay Leno" on Thursday and Friday after Leno became ill.

Tracy St. Pierre would not disclose the nature of Leno's illness.

Leno will be 59 on Tuesday.

NBC canceled tapings of "The Tonight Show with Jay Leno" scheduled for Thursday and Friday, she said.

The network will rerun the March 26 show on Thursday, which features a musical performance by Prince and interviews with actors Paul Giamatti and Emma Roberts, according to the show's Web site.

The network did not announce which show would be broadcast on Friday.