Commentary: Save this 'Terminator'

(CNN) -- Everything you know about the world of Arnold Schwarzenegger's most famous character has changed. 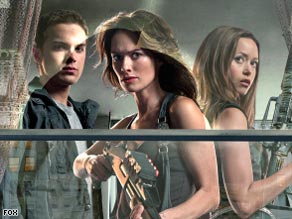 In the season finale of "Terminator: The Sarah Connor Chronicles," John Connor, the boy destined to lead humanity's battle against Armageddon, gets jolted into the future -- the one he was supposed to lead. But here, he has no identity. No one has heard of him.

In this new future, he'll be fighting alongside his father, his uncle and a girl who looks just like the robot he came into the future to save. None of them has any idea who he is.

Confused? Don't be. It was a daring, surprising, brilliant cliffhanger for a show that's gained a loyal following, particularly among people like me who are in awe of it. It also opens the door to anyone who hasn't discovered this show yet, allowing for a fresh start.

Unfortunately, it may be too late. For fans, the big question is whether the "Chronicles" will be back, or canceled for inadequate ratings. We find out in a couple of weeks when Fox announces its schedule. The speculation online doesn't look good.

Ending on this Season 2 cliffhanger would be a shame.

When Fox picked up this "Terminator," it took on one of the most successful sci-fi franchises in modern entertainment history. It courted "Terminator" fans, as well as people like me who never gave much thought to the movies but appreciate deep, high-quality TV storytelling. Ending on this "what happens now" cliffhanger would leave a gaping hole in the franchise's history.

But of bigger concern, of course, is that "The Sarah Connor Chronicles" is just really good TV -- the kind that you want to believe can last. And that's thanks to Josh Friedman, the inspired executive producer.

For him, "Terminator" isn't about special effects and metal monsters. It's a family drama; a mother and son entrusted with a huge secret and the responsibility to change the future, no matter what the cost.

Without clobbering you with messages, Friedman gets you thinking -- about people whose secret struggles you can't know, about living with trauma and moving forward, about the strength and fragility of teenagers, and about the otherwise impossible things parents manage to do to protect their children. Sarah is parental adrenaline personified.

It's also a show about cancer. We know Sarah can successfully battle robots, evil people and well-meaning authorities who want her locked up. But will cancer ultimately do her in? Friedman has talked about the show serving as a catharsis for his own real-life battle against cancer.

Fans can't wait to find out what happens with Sarah (Lena Headey) in the new reality. Did she follow her son into the future? If not, what happened to her?

Friedman might be the best storyteller on TV right now. He packs episodes with twists you don't see coming but make sense in retrospect. He changes up his style, drops lead characters for entire episodes, uses biblical references left and right and delivers dialogue that's simultaneously believable and eloquent. He lets major characters die. And the show's directors coax subtle, nuanced performances from the actors.

You wouldn't guess any of this from Fox's promotions, which have focused too heavily on Cameron (Summer Glau), the robot who helps protect John Connor (Thomas Dekker), sending the signal that it's a show just for teenage fanboys. Cameron and John's relationship is actually a very clever exploration of something adults quickly recognize: the teenage boy with the mysterious girl who seems to have his best interest at heart but might be the most dangerous thing in his life. It's in some ways the reverse of "Buffy."

Speaking of which, Fox may have done better promoting "Chronicles" as a family drama and then pairing it with one, rather than "Dollhouse," the latest from "Buffy" creator Joss Whedon. (Insider question for fans: Is Josh Friedman the new Joss Whedon? Weigh in here or here.)

It's also not clear how, or if, the new movie "Terminator: Salvation" affects the show's chances of survival -- though strictly in terms of storylines, there's apparently no overlap and no conflict.

The weekly adventures of Sarah and John Connor just aren't done. There's too much unanswered, too much left to explore. So here's my pitch to network heads: You can still change the future. Don't terminate these "Chronicles" before their time.

All About Television • TV Dramas