LOS ANGELES, California (CNN) -- Jay Leno plans "something really unusual and different" when he hands over "The Tonight Show" to Conan O'Brien on May 29, 17 years after Johnny Carson left the hosting duties to him. 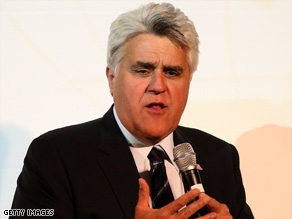 Jay Leno begins "The Jay Leno Show" in September. His last "Tonight Show" is May 29.

But don't expect an emotional final show, since Leno and most of his staff are just moving across the NBC lot to produce a nightly prime time show debuting in September.

The traditional desk, chair and guest sofa probably won't follow Leno to his 10 p.m. show, but many of his favorite comedy elements will, Leno said.

Making people laugh before they go to bed is still the mission.

"The Jay Leno Show" will be competing against scripted dramas, not other comedians telling jokes, which Leno said should give him the edge over the long haul.

"When I was a kid, there was comedy all over TV, and it was fun to watch, whether it was Carol Burnett or any of the sitcoms," he said. "You'd have a whole night of comedy, and now everything is very serious and it's all murder."

The new show will have famous guests, but they will not drive the ratings, Leno said.

"It's all about the joke material," he said. He will "try to keep it moving" with a longer monologue with dozens of jokes, he said. The last half-hour will be filled with comedy, he said.

"You look right in the camera, you directly talk to people as low-tech as possible, a little humor before people go to bed," he said.

NBC's decision to put a talk-variety show on at 10 o'clock raised some complaints from affiliate station owners, worried the ratings wouldn't be strong enough to build an audience for their 11 o'clock local newscasts. The network's Boston affiliate briefly threatened to move its news to 10, pre-empting Leno.

Leno, who grew up in Boston, said he understood the economics behind the concern.

He doesn't expect to beat the dramas the first week out, but he noted those shows produce only about 22 new episodes a year.

"During those repeat weeks and whatever, we'll be live, fresh, original shows," Leno said.

The last week of "The Tonight Show with Jay Leno" will include a lot of looking back and "best of" segments, "because that's easier than writing new stuff," Leno said.

Conan O'Brien will be on the final show, along with singer James Taylor.

Taylor's songs were the last thing Leno heard on the radio when he left Boston in the late 1970s to start his career, so he wanted to have him as his last musical guest, he said.

Leno hinted the last show would have some surprises.

Pressed for more hints, Leno said it was "something really personal, something that has to do with show and staff."

"I think it will make people smile," he said.

Leno can smile as he moves on, having left the legendary show -- which has had only four hosts in 54 years -- as the top show for the past 16 years.

" 'The Tonight Show' is sort of the America's Cup of television, and you don't want to be the guy to screw it up," he said.

If he fails in the new show, he will be all right, he said.

"If it didn't work out, then oh well, at least I have this."