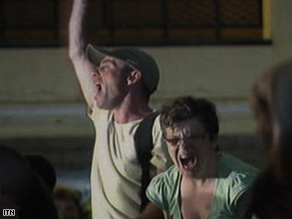 Fans cheering on Susan Boyle react after she comes in second during "Britain's Got Talent."

Boyle was upset by winner Diversity, a 10-person dance group from Essex and East London, England, ranging in age from 12 to 25 years old. The group won 100,000 British pounds ($161,000) and will perform for Queen Elizabeth II in the Royal Variety Show.

The dancers appeared shocked Saturday when it was announced that they had won.

The group was formed in 2007, and in the same year won the United Kingdom Dance Championships.

The group's choreographer "tries to create a dance style that is eye-catching and entertaining" and uses films such as 2007's "Transformers" for inspiration, the show's site said.

Boyle wowed the crowd Saturday night with an encore performance of the song that first made her so famous around the world -- "I Dreamed a Dream," from the musical "Les Miserables."

After her performance Saturday, the crowd and judges gave Boyle, who wore a floor-length gown, a standing ovation.

"You had the nerve to come back here tonight, face your critics and beat them," judge Simon Cowell told her. "You did it."

Boyle had vowed to leave the television show before the finale, after a hectic week, but recanted and performed at the finale Saturday.

The 48-year-old Scottish singer wowed audiences and judges during her audition in April when she belted out "I Dreamed a Dream." Her performance earned her a string of global television appearances.

During the semifinals Sunday, she started off by missing the first note of her performance of "Memory" from the musical, "Cats."

She redeemed herself to earn a standing ovation and a spot in Saturday's finale.

The global fame and the "odd bit of negative press" in the past week have been too overwhelming for her, judge Piers Morgan told CNN's "Larry King Live" on Friday.

"She's just had a pretty rough week because I think the full enormity of what has happened to her is beginning to hit home," Morgan said.

"Earlier this week, she had a lot of tears. ... At one stage, she was going to leave the show. So, fortunately, we've calmed everything down."

Watch how Boyle may be feeling the pressure »

Boyle said that that she has put the tumultuous week behind her and is getting ready for the finale.

"It's all I've been thinking about," she said on the show's Web site. "I'm not going to throw away my big chance now."

"Britain's Got Talent" defended Boyle on its Web site, saying that media reports of an emotional outburst "have been taken out of context."

The unemployed charity worker has inspired millions in the face of pop music's penchant for pre-processed princesses.

Before she sang during her audition, the unassuming single woman with a loose mop of curly hair drew snickers from the audience, including notoriously hard-to-please judge Simon Cowell.

The scowls and eye-rolling were replaced by wild cheers as soon as she sang the first line.

Cowell later apologized for poking fun at her during the auditions stage.

"You are one special lady," he said last week. "You really are."

Reporters made their way to her quiet home in Blackburn, West Lothian, Scotland, much to Boyle's great surprise.

"I keep my feet firmly planted on the ground, because you have to," Boyle told CNN last month.

Asked what has been the most surprising change since her audition, she responded simply -- "The way everyone seems to have embraced me. The way they seem to have apparently fallen in love with me."