LONDON, England (CNN) -- Singing sensation Susan Boyle has been taken to a private clinic suffering from exhaustion following her shock defeat in the final of "Britain's Got Talent," her brother and British media reported Monday. 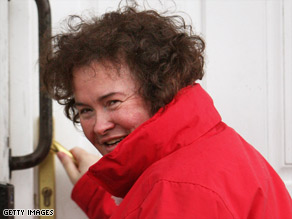 TalkbackThames, the television company which makes the hit series, said the 48-year-old had been left "exhausted and emotionally drained" after Saturday's show in which she was beaten by dance act Diversity.

"Susan has been seen by her private GP (general practitioner), who supports her decision to take a few days out for rest and recovery. We offer her our ongoing support and wish her a speedy recovery," TalkbackThames said in a statement.

London's Metropolitan Police confirmed that officers had been called to a central London hotel and accompanied a woman to a clinic by ambulance, but did not name the woman.

"We were called at about 18:00 on Sunday to a central London hotel to doctors assessing a woman under the mental health act. She was taken voluntary by ambulance to a clinic. At the request of doctors, police accompanied the ambulance," the police said in a statement.

The Priory clinic, where Boyle is reported to have been admitted, declined to comment, citing patient confidentiality.

However, Boyle's brother, John, confirmed her presence there in an interview with the British television network ITN.

"She's in a pressure cooker, as everybody knows," John Boyle said. "And she is just an ordinary lady from Blackburn, for goodness' sake. I mean, she's now catapulted upon the world stage. She loves it, but at the same time it takes a very seasoned performer to handle that."

Boyle, from Blackburn in Scotland, stunned viewers when she first stepped up to the microphone on "Britain's Got Talent six weeks ago with her audition performance of "I Dreamed a Dream" from the musical "Les Miserables" quickly became one of the most watched videos on YouTube.

But Saturday's final ended in disappointment for Boyle who wowed the crowd with an encore performance of the song that first made her so famous -- earning a standing ovation from the crowd and judges.

"You had the nerve to come back here tonight, face your critics and beat them," judge Simon Cowell told her. "You did it."

"She's just had a pretty rough week because I think the full enormity of what has happened to her is beginning to hit home," Morgan said.

"Earlier this week, she had a lot of tears. ... At one stage, she was going to leave the show. So, fortunately, we've calmed everything down."