(CNN) -- Michael Jackson's personal chef Kai Chase says June 25 was shaping up as another typical day in the superstar's usually peaceful and orderly home until an urgent plea from Jackson's personal doctor sent panic sweeping through the household. 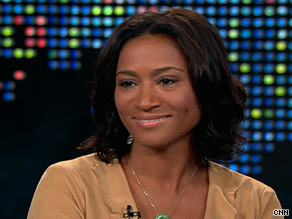 In an interview with CNN's Larry King that aired Thursday night, Chase described the chaotic events that fateful day and what life was like inside the Jackson family before the singer's shocking death.

Chase said she was downstairs preparing lunch for Jackson -- being sure to wrap it in Saran wrap because the singer liked his meals served room-service style -- when Dr. Conrad Murray called out for her. Murray is the central focus of a federal investigation into the singer's death, a law enforcement official told CNN on Wednesday.

Around noon or a little after, Chase said, "Dr. Murray comes down the stairs. There was a stairwell that leads into the kitchen. And he's screaming: Hurry! Go get Prince. Call security. Get Prince."

"Within minutes, the paramedics are there. And the security is running upstairs, skipping stairs and all of a sudden we're all, you know, panicked," Chase told King. "So the energy in the house had just kind of changed from that happy kind of day that we were having and preparing lunch and having a good time to just kind of eerie."

Chase said Jackson's daughter, Paris, started crying and calling out for her father as people in the home came to realize how serious the medical situation was.

"We started crying and we all come together in unity in a circle and we started holding hands. And we started praying," Chase said.

The chef said she was not allowed into the upstairs quarters of the home, but she had seen Michael Jackson downstairs on Wednesday, June 24. Nothing she saw the day before cause her alarm.

"He ate lunch with his children at the dinner table. And then I packed ... his dinner for him to go to his rehearsal. He seemed like he was just, you know, tired," Chase said. She attributed the way he felt to his long rehearsals.

Chase said Jackson did complain once about his demanding schedule.

Between 1 and 1:30 p.m. June 25, Chase said security asked her to leave the home, and she never saw Michael Jackson being transported to the hospital. She didn't learn of Jackson's death until later that day on the radio.

Chase said that Murray was in the house often in June and she attributed the doctor's frequent presence to Jackson's rigorous rehearsal schedule for an upcoming series of concerts in London, England.

Search warrants filed Thursday in court in Clark County, Nevada, and carried out at Murray's offices imply that investigators looking into his death believe the singer was a drug addict.

In his interview with Chase, King pressed for details of evidence of drug use by Jackson:

King: Where were they?

Chase: I would see Dr. Murray carrying the oxygen tanks down in the mornings.

King: On that morning or other mornings?

Chase: No. I didn't see him that morning. I saw him in the afternoon, but other mornings.

King: He would carry them down?

Chase: Carry them down.

King: They were portable oxygen tanks?

Chase said she just recently learned the warrants to search Murray's offices cited her name as a suspected alias for Michael Jackson.

"I was just made aware of that from my publicist. I think that is ... appalling. I have no clue what that is about," Chase said.

She said detectives came to her home right after the death but did not ask her about her name being on any prescriptions.

"I don't know what make of it," Chase told King.

Chase, who said she's been a professional chef for about 14 years, said she's seen the Jackson children since June 25.

"They're doing great. And I saw them a couple of weeks ago," she said. "And they look great and they're playing with their cousins and having a good time."

Chase said she was first employed by Jackson in March but was let go. She said Jackson asked her to come back to their California residence in June and that the children were happy about her return.

She said the children gave her a "box of happiness" on return that contained little gifts and letters. One of them read in part:

"Dear Kai, thank you for the gifts and the gumbo. I hope you enjoy the gift. I think you'll like it. Love, Prince Jackson."

Chase said she said no evidence that Michael Jackson was a poor eater. In fact, she said just the opposite was true from her observations.

"He ate very well," she said. "He ate organic and fresh. He [was] into the health foods and juices and things of that nature."

• On Katherine Jackson, Michael's mother: "I saw the interaction with them when I went to the home. ... They love their grandma, you know. It's a beautiful bond that they have together."

• On Jackson's ex-wife having visitation rights to her children: "I think Debbie Rowe should see and raise her children."

• On Jackson's planned London shows: "We started talking about bringing, you know, video games and stuff to the private jet. And it was just, you know, he was very excited about going on this -- doing this tour. This is his comeback."

Life in the Jackson household -- from Chase's account -- was a loving and cheerful one and that he loved his three children.

"You know, I would bring ... the lunches and set them on the table and they'd all come in and sit, close the door and they'd dine privately. And you would just hear laughter and story-telling and just beautiful things. Those were his babies."