(CNN) -- When Fox aired a sneak-peek episode of its new series "Glee" four months before the show actually premiered, it took a big chance that the audience would still care. 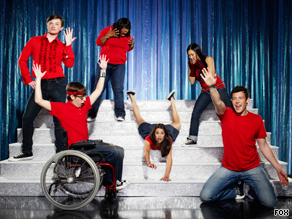 The new show "Glee" had the backing of an innovative marketing campaign.

To help maintain the buzz, it delved into social networking, maintained a strong online presence, dispatched the show's actors to malls across the country and held a fan contest.

In an era when episodic television is battling for ratings against reality television and broadcast TV faces the loss of audience to cable networks, those familiar with the industry said, such innovation may have to become the norm.

"Particularly for those networks that skew younger such as Fox, CW and ABC to an extent, they are going to have to really promote all of their shows all year long and find new ways to keep them in front of their viewers and remind them that they are there," said Ed Martin, a television critic who writes for JackMyers.com. "What Fox did last spring was something totally new that had never been done before."

In a week when most prime time shows are debuting with the hopes of attracting an audience, "Glee" seems to have already found its niche. On Monday, Fox announced that it had ordered a full season of the show.

"Glee" follows the exploits of a group of underdogs who are members of a high school show choir.

The hour-long musical comedy, co-created by "Nip/Tuck" producer Ryan Murphy, created high anticipation after its first airing in May, following an episode of the wildly popular "American Idol."

The pilot was re-aired with a special director's cut prior to the premier of the actual season with Fox counting the pilot as episode one. Episode four debuts on Wednesday.

Bill Gorman, editor and co-founder of the site TV By the Numbers, said he would put the level of interest in "Glee" on his site "as pretty strong for a new show."

Gorman said the show -- whose premiere numbers may or may not have been helped by the fact it was one of the few airing during President Obama's health care address -- is initially faring well among the coveted 18- to 49-year-old viewer demographic.

According to the Nielsen Ratings, the "Glee" premiere garnered 7.44 million viewers, placing it in 19th place in the top 20.

Watch a clip of the show's second episode »

"The 'Glee' premiere this fall did better than what Fox is calling the preview after 'American Idol,' " Gorman said.

To maintain interest over the summer, the show embarked on an ambitious marketing scheme. Joe Earley, executive vice president of marketing and communications for Fox, said the show was screened at summer camps, stars engaged in a 10-city tour, street teams handed out "Glee"-related items, and trailers were shown in front of the latest "Harry Potter" film.

Online, characters had Facebook pages and Twitter accounts, the pilot was available for streaming, and the show's stars took handheld cameras to events to gather behind-the-scenes content. The director's cut of the pilot was followed by a "Tweet-peat" where the stars and the fans took to Twitter to discuss the episode.

Martin said he was present when Fox screened an episode at the geekiest of all events: Comic-Con in San Diego, California.

"It was a standing-room-only crowd of several thousands of people," Martin said. "The cheering and yelling and screaming was ear-splitting. The crowd almost blew the roof off the place with their enthusiasm for the episode."

Visibility seemed to be key for the quirky show that some have referred to as " 'High School Musical' on steroids."

Earley said one challenge came in that the many facets that have given "Glee" its distinction -- it's a black comedy, it's a musical, it's a drama, it's about high school, it's about adults -- also made it difficult to market.

Still, airing the pilot four months before its regular run could have easily backfired, he said.

"If people didn't like it, it would have been four months of negative buzz," he said. "We could have been killing a show before it even began."

The result has been an strong fan base with a deep engagement who are taking to social networking to spread the message and buying the songs on iTunes, Earley said.

"What we have is this core of really passionate, very savvy fans, and they are definitely ambassadors for the show," said Earley, who added that executives have been pleased with the ratings.

Chicago Tribune TV critic Maureen Ryan said executives seem to have totally committed to a show that from the onset was a risk.

"You either love this show, or you really don't care," she said. "There's not really a huge amount of in-between."

Ryan said that, in her opinion, the show is far from perfect (she points to the unlovable character of teacher Will Schuester's wife as a weakness) but says it has an opportunity to do well commercially.

"The terrific thing about 'Glee' is not only that it has this interesting concept going for it, but it has a ton on money-making potential," she said. "They've been selling the DVD of the pilot at Walmart, and they sent out a press release saying five of the top 200 songs on iTunes are songs from the show, and they are releasing a soundtrack soon."

Critic Martin said, given its mix of music and satire, the "Glee" strategy may not work for every show -- say a medical drama -- but if the network strikes gold with the new series, he imagines that it may serve as a blueprint for others.

"It would not surprise me at all if Fox had another promising new show in their development plan for next fall and decided to give it the same treatment as 'Glee,' " Martin said.

All About Music • Nip/Tuck • Television