(CNN) -- Tyra Banks has gone from supermodel to super businesswoman. 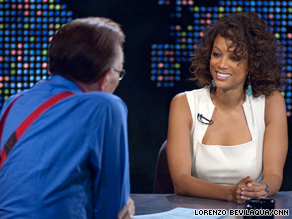 Tyra Banks shows off her real hair during an appearance on "Larry King Live."

With her successful TV talk show, "The Tyra Show," as well as her duties as host/creator and executive producer of "America's Next Top Model, it would seem that Banks has scant room left on her plate.

But she recently launched an online magazine called "TYRA: Beauty Inside and Out."

Banks talked to CNN's Larry King about her career aspirations, the "F" word and the story behind her "real hair."

Larry King: Are you looking to be Oprah? Is that it?

Tyra Banks: Am I looking to be Oprah? Oh, Lord, if I tried, I would fail.

King: But you're approaching it -- magazines, shows, specials. ...

Banks: She is like the -- the Godmama, you know? There will never be another. There never has been and never will be another.

King: The last time you were on you were dealing with the "F" word, meaning fat. You were fighting back. There [was] a nonflattering tabloid photo of you -- remember? In the swimsuit?

King: You lost weight since then.

King: Do you still feel an image pressure? Do you think -- you think like a fat person?

Banks: Yes. When I told the world to kiss my fat ass, I remained that size for two years. I maintained it with my ice cream and my salad with ranch and dressing and croutons and bacon bits. Like I -- I didn't look at myself even on television and think that I was too big or -- I don't know. I didn't -- it didn't connect.

But since I have lost a lot of weight, and it started with the -- a weight loss challenge, actually at the top of this year. So I'm two years after "kiss my fat ass."

King: When you look in the mirror, are you happy with the way you look?

Banks: I've -- OK, I might be doing a little TMI -- do you know what TMI is? Too much information?

King: Well, give it to me anyway.

Banks: I always feel great when I don't have clothes on. So at home, by myself, walking past ...

Banks: Just too much information. But I always feel good that way.

King: So you don't look at yourself nude and say, "Oh, I don't like this." You like it?

Banks: No, unless the lighting is bad in the dressing room. But, no. I always feel good. But sometimes certain clothes, when I put them on and they don't fit the way that I would like them to, that's when I tend to get self-conscious.

King: All right. You kicked off season five of your talk show by revealing your real hair.

I know it's been a big mystery. And I was like it was an unsolved mystery, and I felt like I needed to solve this mystery.

King: How did that feel?

Banks: Yes. This is me. You want to feel my scalp?

Banks: Yes? It's a little kinky in the scalp. That's like real black girl hair.

But, I mean, hair for black women, we spend $9 billion a year on hair products -- black women do. So growing up as a young girl and seeing images in the media where they're saying that a certain type of hair is beautiful and yours isn't is very difficult for a black woman -- for black women and it's a -- it's a long, political thing that we can do a whole show about.

But I felt it was my responsibility to show as much of my real hair as possible.