CBS producer pleads not guilty to trying to blackmail Letterman 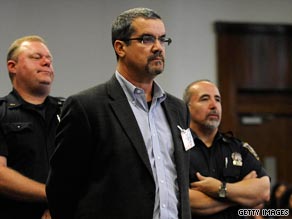 The producer, Robert Joel "Joe" Halderman, 51, of Norwalk, Connecticut, allegedly told Letterman last month that he would disclose Letterman's dalliances with his show's staffers unless he paid the money.

Halderman is charged with first-degree attempted grand larceny. He has been suspended from his CBS job.

Prosecutors at his arraignment in Manhattan Criminal Court had sought $500,000 bail, calling Halderman a flight risk.

"The evidence is compelling," Assistant District Attorney Judy Salwen told the court. It shows that Halderman was trying to "destroy" Letterman's reputation and "humiliate his family," she said.

Watch to learn more about Halderman »

"The defendant was desperate and willing to do anything," Salwen added, saying Halderman was in debt.

Defense attorney Gerald Shargel said his client has worked at CBS for 27 years and has two children, ages 11 and 18.

After the arraignment, Shargel said he believed that Halderman would post the bond and said Halderman denies the allegations. Halderman was seen in a car pulling away from the courthouse after the hearing.

"This story is far more complicated than what you heard this afternoon," the lawyer said, without elaborating. "It's not the open and shut case you just heard about."

Shargel said Halderman has "an impeccable reputation" and has never before been in trouble with the law. He said he expected to take the case to trial.

Documents filed in Stamford Superior Court in Connecticut show that Halderman was required to pay about $6,800 a month in child and spousal support to his ex-wife. Prosecutors declined to say whether Halderman had financial problems or other motives.

Earlier Friday, Shargel said he met with his client briefly at the jail.

"He is not dispirited," the lawyer said. "We're prepared to fight this case."

Halderman told Letterman in a proposed script that his "world was about to collapse around him" unless he received $2 million, Manhattan District Attorney Robert Morgenthau said.

The one-page "screenplay treatment," which was attached to a letter, referred to Letterman's great professional success and his "beautiful and loving son," Morgenthau said at a news conference. The contents of the letter were not revealed at the briefing.

A screenplay treatment is similar to an outline. It describes the proposed plot and subplots, character interactions and tone of a story, such as a melodrama or romance.

Letterman acknowledged on his show Thursday night that he'd had sexual relations with members of his staff and that he revealed those liaisons during grand jury testimony for a case involving an attempted extortion.

A representative for Letterman's production company, Worldwide Pants Inc., said Friday that the relationships Letterman referred to "when discussing the matter on the Late Show predated his marriage" to longtime partner Regina Lasko. The couple, who have been together since 1986, wed in March. They have a son, Harry, 5.

Morgenthau said Letterman gave Halderman, a producer for the CBS news magazine "48 Hours," a $2 million check Wednesday, and Halderman deposited it in a bank account in Connecticut. He was arrested Thursday outside CBS offices, the district attorney said.

"We could tell that he was slightly down," Smith said. "He wasn't his normal, bubbly, cheerful self. He sounded very tired."

Smith described Halderman as a "very loving individual" who "loved his job with CBS."

Halderman could face five to 15 years in prison if convicted. Morgenthau said the alleged extortion incidents were carried out between September 9 and September 30.

According to the indictment, Halderman waited outside Letterman's Manhattan home at 6 a.m. September 9 to deliver the letter and other materials. Letterman said on his show that he saw the package when he went out to his car to leave for work.

Halderman said he needed to "make a large chunk of money" by selling Letterman the "screenplay treatment," Morgenthau said.

The materials from Halderman also said Letterman's "world was about to collapse around him" if the information on his private life was unveiled, leading to a "ruined reputation." The letter asked Letterman to meet with Halderman that day to make a deal, Morgenthau said.

He said Letterman, who had reported the alleged extortion to his attorney and the district attorney's office, met with Halderman several times. The last two meetings were audiotaped.

"The message of this indictment should be clear. New York City will not tolerate the coercion or extortion of anyone, be the victim rich or poor, famous or anonymous," Morgenthau said. "The law prohibits conduct like the defendant's and attaches severe penalty to it. We intend to enforce the law."

Letterman told his audience that he testified before the grand jury Thursday, "something I've never done in my life."

"I had to go downtown to testify before the grand jury" and "tell them all of the creepy things that I've done," referring to his sexual dalliances.

Watch Letterman say he slept with members of his staff »

"I have had sex with women who work on this show," he said. "Would it be embarrassing if it were made public? Perhaps it would, especially for the women."

"It's been a very bizarre experience," Letterman said in closing. "I don't plan to say much more about this."