(CNN) -- For someone who seems to go to great lengths to keep his private life away from prying eyes, late-night talk show host David Letterman has seen a great deal of his personal life become public. 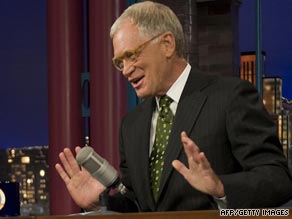 David Letterman has mined private events in his life for very public jokes on his show.

Heart problems, a troubled stalker and a plot to kidnap his son have all landed Letterman in the news and provided fodder for jokes, including some of his own.

The latest, an alleged extortion attempt involving his sexual dalliances (it's been dubbed "sextortion" by pundits), was handled very much the way Letterman fans might expect: with humor and a bit of storytelling.

"He told it as a story that you felt like you were living along with him, and so I think he immediately won your sympathy by telling it that way," said Hal Boedeker, TV critic for the Orlando Sentinel. "He also took the seedy factor out of it with restraint by not saying too much and trying to protect the people he was involved with."

Letterman revealed on his show Thursday night that he'd had sexual relations with members of his staff and that he had testified about those liaisons before a New York grand jury for a case involving the alleged attempted extortion.

A CBS producer, Robert "Joe" Halderman, has been charged with first-degree attempted grand larceny; officials said he threatened to go public with the 62-year-old funnyman's dalliances unless Letterman paid $2 million.

The revelation, which Letterman shared with the audience of the "Late Show," seemed especially shocking given his reputation as the self-deprecating everyman.

"Letterman picked up on [that shock] and played on that," said Robert Thompson, a professor and founding director of the Bleier Center for Television and Popular Culture at Syracuse University. "It was the weirdest 10 minutes of television I've seen in a long time, and yet I think I've concluded that it was brilliant."

Letterman has had plenty of experience dealing with awkward, and sometimes painful, episodes on television.

Beginning in the 1980s, he was stalked by Margaret Ray, a woman with schizophrenia who often broke into his New Canaan, Connecticut, home, wrote him letters and once stole his Porsche.

Letterman would sometimes joke about her -- without using her name -- on his show and told The New York Times that was because he joked about every public aspect of his life.

Ray would refer to herself as "Mrs. David Letterman" and once watched the talk show host and his now-wife Regina Lasko from a hallway in their home as they lay in bed.

Ray committed suicide in 1998; Letterman offered his condolences on-air to her family.

Though Letterman was quoted as saying Ray's actions were usually more odd than frightening, a plot in 2005 to kidnap his then-toddler son proved to be more alarming.

Kelly A. Frank, an ex-con who had done some work at Letterman's Deep Creek Ranch in Montana, was charged with planning to kidnap Letterman's son, Harry, and his nanny.

Frank pleaded guilty to lesser charges and was sentenced to 10 years in jail. In 2007, he escaped and was later captured.

Thompson said Letterman has shown that he is able to rise above his troubles, including emergency bypass surgery in 2000, with a healthy dose of comedy. This latest incident was no different, Thompson observed.

"The interesting thing is that he never went out of comic mode," Thompson said. "His magnum opus was when he was the first late-night comedian to come back after September 11th ... and he did it brilliantly. All of the other comics who came on in the following weeks followed him exactly."

He kept Thursday's tale so light, Thompson said, that many who may not have been aware of the news would have thought it was just another Letterman bit.

"I think he realized that we are so cynical and so disbelieving of this long string of people apologizing for stuff like this," Thompson said. "We don't believe it anymore, and we think they are only doing it for public relations. But he didn't handle it that way, and he delivered it in such a way that it came across as light-hearted and sincere."

Glenn Selig, founder of the Publicity Agency, said that from a crisis-management perspective, Letterman handled his most recent incident well.

"I think the fact that he put it out there in his own way, in his own terms with the timing that he wanted to do it, that was the best way to go," Selig said. "He tried to interject some humor and self-deprecation into it, which I think takes the wind out of those who may have tried to knock him down, because he was already knocking himself down."

And although more intimate, and embarrassing, details may be revealed as the case continues, critic Boedeker said he thinks Letterman, his show and his career will come out well.

"I think his fans are, for the most part, pretty forgiving," Boedeker said. "He's always made fun of himself and his looks. It's not as if he has set himself up as some paragon of virtue, and I really don't think this will hurt him in the long run."

A representative for Letterman's company, Worldwide Pants, said, "All the relationships David Letterman was referencing when discussing the matter on the 'Late Show' predated his marriage to Regina" in March.