(CNN) -- David Letterman may be under attack from some quarters after the revelations that he had sexual affairs with staffers, but he still has the support of a number of notables, as well as TV viewers. 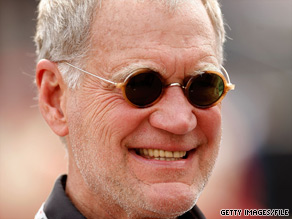 David Letterman has certainly received some criticism, but it looks like viewers are sticking with him for now.

On Monday, "Late Show with David Letterman" pulled in 5.7 million viewers, according to the Hollywood Reporter, which is a 19 percent increase over the show's average of 4.8 million. It was one of the most widely watched shows of the season. (One of the few that surpassed it: the September 21 episode with President Obama.)

"Dave's big night last night was about 1.45 million for adults 18-49, based on the 1.1 rating points in that demographic," Bill Gorman of Web site TV By the Numbers said of Nielsen's preliminary results. In Nielsen-speak, a rating point is a percentage of that population in a demographic. The results Gorman references were compiled from 24 markets with local people meters.

"With Dave's confession, he wins three nights now out of four -- Thursday, Monday and Tuesday," Gorman said. However, he added, "O'Brien is still beating him 18-34, so the youngest viewers are still sticking with Conan."

The aftermath of Letterman's office affairs is creating a ratings lead that the show hasn't seen since 1994, according to USA Today.

So the question becomes, as Gorman puts it, "Is this David Letterman's Hugh Grant moment?" In 1995, Jay Leno pulled ahead of Letterman in ratings thanks to his much-watched "What were you thinking?" interview with a contrite Hugh Grant.

It very well could be, considering the signs of support Letterman has received from Martha Stewart and Barbara Walters.

During Monday's and Wednesday's taping of "The View," Walters expressed sympathy for Letterman, calling him "a very attractive man" and disagreeing with co-host Joy Behar that Letterman's affairs qualify as sexual harassment.

Stewart told The New York Times, "I think all this was done while he was still not married. Although it's still probably harmful to his wife of six months or however long they are married, she probably didn't know all of the details. But, you know, men are men."

However, Ann Curry, Kathie Lee Gifford and the National Organization for Women are among those who have criticized Letterman's affairs with former female employees. NOW released a statement accusing him of promoting a hostile, uncomfortable work environment.

But the talk show host hasn't swayed from his trademark wit since he first dropped the bombshell Thursday, and that could be why the viewers keep coming back.

"It seems like from the very beginning he got the audience on his side, and perhaps as a viewer at home, when you see the audience respond well, you're more likely to respond generously," said Tim Molloy of TVGuide.com.

Molloy and Gorman say it's too early to tell whether or not Letterman's ratings surge will continue, and how the scandal's aftermath will affect his female viewership.

"It's been three days," Gorman said. "I'm not surprised at the ratings, because he's kind of dragged it out. When he came out on Monday night, there was more apologizing. Did he do that because he wanted to boost his ratings or because he had more to say? Maybe both. But some segment of people are fixated on the current hubbub, and how many of them will stick around? If a month from now we find out Dave beat Conan half the time over the next month, then it's a trend."

Molloy agreed and said there isn't much scandal left for Letterman to piggy-back on.

"Conflict and controversy will always do well," Molloy said. "The best thing for him right now is to keep being self-effacing, and criticize himself before anyone else can criticize him."