(CNN) -- Movie star and singer Harry Connick Jr. made waves around the world by condemning, on air, an Australian television skit featuring a group of performers who wore blackface to impersonate the late pop star Michael Jackson and his brothers. 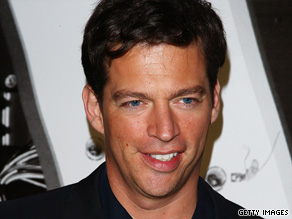 Harry Connick Jr. was visibly dismayed after watching an insensitive skit performance on an Australian show.

The "Jackson Jive" performed the song "Can You Feel It" Wednesday wearing huge black wigs, blackface and one spangled glove each. The Michael Jackson impersonator wore whiteface.

Connick was one of the judges on the program, a special edition of the Australian variety show "Hey Hey It's Saturday," which aired Wednesday.

"If they turned up looking like that in the United States," he said, frowning, "Hey, hey, there's no more show."

Watch Connick's reaction to the performance »

The show's host, longtime Australian TV presenter Daryl Somers, may have compounded the problem by twice referring to the performers as "boys" -- a historically derogatory way of talking to or about black men.

"It didn't occur to me until later -- I think we may have offended you with that and I deeply apologize on behalf of all of us," he said. "Because I know, your countrymen, it's an insult to have a blackface routine."

Connick replied that he would not have appeared on the show if he had known about the routine in advance.

In a message posted on his Web site, Connick wrote that "in the American culture, the blackface image is steeped in a negative history and considered offensive."

Connick also sought to clarify that he didn't "ascribe any motives to anyone" or "call anyone a racist" on the show.

"I do not believe that the performers intended any harm," Connick's message stated. "I appreciate the folks who have written in support but please know that I allow everyone their own opinions and can only speak for myself."

Also on Connick's Web site was a response to criticisms that the performer was in a sketch on the "MadTV" comedy variety show in which he appeared to be mimicking a black preacher. According to the Web site posting, the 1996 sketch was "a spoof featuring a black baptist [sic] minister [played by African-American comedian Orlando Jones] ... and a white southern evangelical preacher."

Connick was playing the white preacher, the posting stated.

All About Harry Connick, Jr.