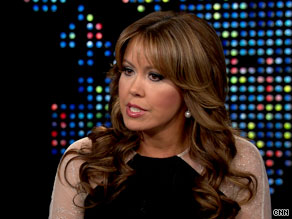 Mary Murphy says she was abused by her ex-husband during their nine-year marriage.

Murphy -- the vivacious judge on Fox TV's "So You Think You Can Dance" -- told CNN's Larry King that she wants other victims to learn from how she endured, but escaped, domestic violence.

Discovering her talent with dance eventually changed her life and helped her flee the relationship after nine years, she said.

Her ex-husband strongly denied that he ever physically or mentally abused Murphy, whom he married in 1978 soon after they met as teenagers in college.

"I did just tuck it away and just buried it and went on with my life and I thought that, you know, I could leave it there and I wanted to leave it there until my father died a couple years ago," Murphy said.

Discussions with her dying father led to him apologizing for not being "my knight in shining armor" by intervening, she said.

"I still had no intention to talk to anybody until I saw Rihanna's face and seeing that just brought it all up."

"Abuse, it just survives and thrives in silence," Murphy said.

US Weekly magazine's current issue offers a detailed version of Murphy's revelations in its cover story.

Murphy tells the magazine about a whirlwind romance that began in 1977 when she was a 19-year-old Ohio State University student -- swept off her feet by an 18-year-old who was "extraordinarily handsome."

She told King that the marriage began "getting out of control" after just three months when her husband's jealously triggered fights.

"It increased until we started to have just horrible fights," she said. "And then at the time, after a fight in which I didn't want to have sex, it just escalated to the point that he literally had to rape me in order for me to have sex."

When a neighbor called police to her home, Murphy said she was too frightened to press charges.

"I looked at him and with the look on his face, I said 'absolutely not' and went back in my room and just laid there and cried," she said.

Murphy said she left her husband several times over the nine-year marriage, but "there weren't the shelters that there are today."

Murphy discovered her talent and love of dance several years into the marriage when she took a summer job at a dance studio while her husband was away for several months running the family's business in the Middle East, she said.

"It made me feel beautiful instead of how I was probably really feeling inside, totally ashamed and dirty," she said.

Their marriage ended only after she and her husband renewed their vows in a wedding ceremony in front of his family and friends in Amman, Jordan, in 1985.

She learned he had a girlfriend -- to whom he was engaged -- in the Middle East. It was his infidelity that convinced her to divorce him, she said.

Her former husband -- who spoke to Larry King off the air -- said he was "totally shocked" by Murphy's account of their marriage. "I never harmed her," he said.

"If all of these allegations are true, she could have had me deported," he said. He is not a U.S. citizen.

He questioned if her motivation was "more fame or sympathy."

Still, he said he is "very, very proud" of her.

Murphy told King his response is what she expected.

"I think a lot of men out there, by the way, that when they do get married they feel like this is their right to do whatever they want to do, and it's not," she said. "And I was a scared, frightened person."

Murphy said she is still afraid of her former husband.

"I'm not going to lie to you that he still scares me," she said. "I still live in fear that he will do something to me, that I will go missing."

Fear of not being able to make it on her own still drives her today, she said.

"I put this behind me, went out and worked like I've never worked before," she said. "And I still work today like I could still be homeless."