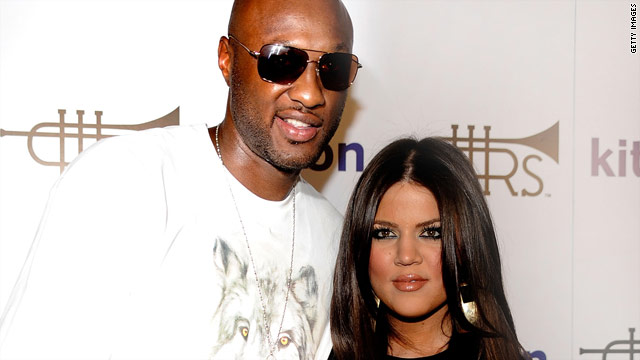 Newlywed Khloe Kardashian was surprised at how well her wedding to basketball star Lamar Odom did in the ratings.
STORY HIGHLIGHTS
RELATED TOPICS

(CNN) -- The much anticipated wedding episode of "Keeping up With the Kardashians" brought in record ratings for the E! entertainment network on Sunday night.

The two-hour special, featuring the whirlwind nuptials of Khloe Kardashian and Los Angeles Laker Lamar Odom, pulled in 3.2 million viewers for the network.

The reality television show, produced by "American Idol" host Ryan Seacrest, documents the lives of the Kardashian-Jenner family, including socialite and model Kim Kardashian. The show began airing in 2007 and has spawned one spin-off featuring Khloe and Kourtney Kardashian, "Kourtney & Khloe Take Miami."

Kardashian, 25, and Odom , 30, announced their engagement in September, only a month after they met at a party.

They married on September 27 in a night-clubbed themed black tie wedding at a Beverly Hills mansion in front of 250 guests including, including Seacrest, Kelly Osbourne, Odom's Laker teammate Kobe Bryant with his wife Vanessa, Chelsea Handler, Lara Spencer, Brittny Gastineau and Lala Vazquez.

Even though she lived through the media firestorm that was the real event, Khloe herself was surprised that Sunday night's episode did so well in the ratings.

"I was skeptical to have everything documented because it was such an emotional time but now that's its done I think it is such a positive and beautiful thing," Kardashian told CNN. "I don't think any of us expected the show or this episode to do so well. In the beginning we just did it for fun, for ourselves and it has snowballed into this huge thing. I am just shocked every time I see the numbers and hear all the comments."

The extended episode included the typical Kardashian dramatics, including Khloe's stepfather Bruce Jenner losing his cool when he found out about her engagement on television.

Khloe tried to field questions from her friends and family about her quickie engagement and eventually convinced her clan to trust her judgment, insisting that she and Odom were destined to be "together forever."

America also saw a softer side of basketball star Odom, who teared up during the ceremony.

"Lamar has seen the episode and he loved it, but he was skeptical of it. He's a guy and of course he thinks that he looks corny on television," Kardashian said.

Fans of the show can look forward to more big events in the lives of the Kardashians. Odom revealed last week on the E! show "Chelsea Lately" that he wants to have a baby with his new wife, "soon."

Khloe said she isn't ready to go there just yet, but at the end of the day her and her new husband aren't taking any precautions against getting pregnant.

"We definitely talk about it. Right now we are house hunting and we are not planning to have a baby but we're not doing anything to not have a baby right now," Kardashian said. "I would be over the moon if I was having a baby but right now our focus in on finding a house. They say it's a buyers' market but no one is selling and I think it would be very stressful to have a baby in a condo downtown."