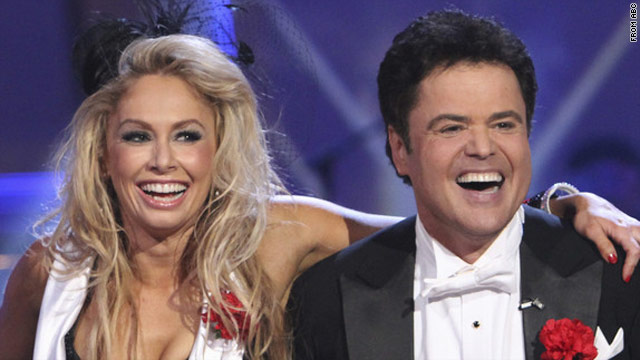 Professional dancer Kym Johnson and Donny Osmond are the new champions of "Dancing With the Stars."
STORY HIGHLIGHTS
RELATED TOPICS

Osmond was named champion of this season's edition of "Dancing With the Stars" on Tuesday night, beating out singer Mya, who took second place, and Kelly Osbourne, who finished third.

"You are born to perform," the judges told Osmond earlier during the two-hour season finale of the hit series.

The entertainer beamed as he held up the trophy with his professional dancing partner Kym Johnson, then ran into the audience and brought his family onto the dance floor to celebrate.

Donny Osmond has been a crowd favorite, working hard to learn his routines, throwing himself fully into the character of each dance and playfully making fun of his age. (At almost 52, he was decades older than some of his competitors.)

His sister Marie, who famously fainted when she was a contestant on an earlier season of "Dancing With the Stars," was a frequent supporter in the audience.

Mya performed a jive with her partner Dmitry Chaplin. From the start, she was one of the best and most polished celebrity dancers of the season, receiving several perfect scores from the judges but also frequent criticism that more was expected from her given her talent.

Some viewers felt the judges were too hard on her, while others argued she had more dancing experience than other contestants and had an edge over those who were novices.

Perhaps the biggest surprise of the show was Osbourne, the daughter of rocker Ozzy Osbourne. She was a standout contestant since the first week of competition when she danced an elegant waltz that left her mother, Sharon, in tears in the audience.

Osbourne and her dancing partner Louis van Amstel reprised the dance for the finale with similar results. The performance left the audience chanting her name, while Osbourne, her family, van Amstel and one of the judges teared up.

"You are a ballroom princess," said judge Bruno Tonioli.

Osbourne had her share of stumbles and mistakes during the competition but seemed to charm viewers with her quirky personality and received consistent praise from the judges for her progress.

The season began with 16 contestants with varying degrees of celebrity trying to impress the judges and viewers with their newly learned ballroom dancing moves. As in past editions of the show, most of the stars came from the worlds of entertainment, sports and fashion.

Politics also was represented in the form of former House Majority Leader Tom DeLay, perhaps the most talked about contestant of the season. DeLay pulled out of the competition a few weeks after its start because of painful stress fractures in both of his feet but not before gyrating to "Wild Thing" and performing dances such as the tango and samba. DeLay returned to the show for the finale Tuesday night, dancing the Texas Two Step.

This was the ninth season of "Dancing With the Stars."