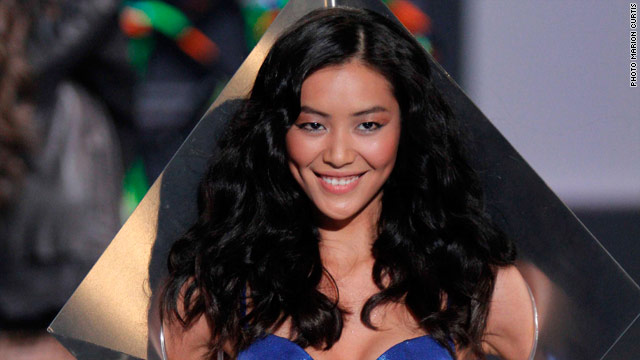 (CNN) -- Four years ago Liu Wen entered a modeling contest in China to win a computer to use for school. Little did she know it would lead her to the Victoria's Secret runway in New York.

"I was surprised when my agent told me," Wen said hours before she was set to walk the runway. She seemed only slightly overwhelmed: clad in a pink robe, one technician assigned to her fingernails, another to her toenails and another adding extensions to her already long black hair. "I asked my agent if she was joking. I didn't think an Asian girl would get this job."

"Liu Wen is a beautiful woman. She has a strong and energetic presence on the runway. She looked absolutely stunning in our fashion show," said the show's executive producer, Monica Mitro.

At 5-foot-10, Wen said she towered over her classmates in China.

The newest addition to the Victoria's Secret family was born in Yongzhou in China's Hunan province in 1988, the daughter of an interior designer dad and a stay-at-home mom.

She was in high school when, on a whim, she submitted photos for a modeling contest, hoping to win the top prize of a laptop computer.

"I was studying to be a teacher in China and my friend was entering a modeling contest," she said. "The prize was a computer, and I needed a computer for school. So I entered the contest, too, and then I won."

Her family and friends, including the one who originally had the idea to enter the contest, were shocked.

"My friends were all surprised," she said. "They were all like, 'sure, you're pretty.' "

Soon Wen had moved from Yongzhou to the Chinese capital of Beijing, where she appeared on the covers of Chinese editions of FHM and Marie Claire, as well as in editorials for Chinese Vogue. In 2008 she landed on the cover of Chinese Elle alongside fellow rising star Emma Pei.

Wen made her runway debut in Milan, Italy, in 2008, followed quickly by Paris, France, and New York fashion weeks where she walked in such shows as Anna Sui, Dolce & Gabbana, Alexander McQueen, Chloé and Lanvin.

Although her walk down the runway will be a first for Victoria's Secret, Wen is part of a growing trend for Asian models worldwide that began several years ago with Devon Aoki. The past few seasons of fashion shows have featured Asian models on almost every high-end runway.

"I talk to my mom in China every day when I am traveling. My family is always excited to hear about the top designers I am meeting and the clothes I get to wear," Wen said.

She said was familiar with the Victoria's Secret show, though being on the inside was something new.

"Of course I had seen the show on television. I watched it every year," Wen said. "But it was so different when I got here and got to meet the other girls. I got to meet Heidi Klum for the first time after I had known about her for so long. And she was so nice."

Wen thinks she may try her hand at acting when she has gotten over the modeling bug, but she said she would be just as happy returning to China to be a teacher like she originally planned.

"In the classroom everyone respects the teacher. The teacher has all the control and has the ability to shape all of her students' lives," Wen said. "But for now modeling is such great fun. I'm still trying out new sexy faces."