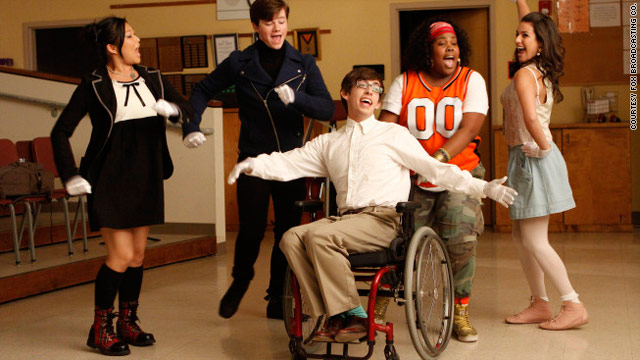 The tuneful cast of "Glee" helped make the new series one of the best shows of 2009.
STORY HIGHLIGHTS
RELATED TOPICS

(CNN) -- Picking the best television shows of 2009 is risky business.

Plenty of shows have loyal fan bases, and many of those viewers will question these choices with a "what about" and a "how could you not include" at the top of their lungs.

So the caveat here is that the following is a list of some of the best shows of the past year, ranked in no particular order, all of which made TV land just a little bit brighter in the '09.

Ordinarily, a show about a group of high school students who at any moment might burst into song is a recipe for disaster as far as most adults are concerned. But "Glee" does it with such quirky charm and bravado that it is impossible not to get swept up.

The cast has chops, both acting and singing, and with its sometimes risqué dialogue and endearing characters, what's not to love? Not to mention covers of songs that sometimes rival the original tunes.

But one of the best things about the show can be summed up in two words: Jane Lynch. Her Sue Sylvester, coach of the "Cheerios," is so deliciously self-absorbed, calculating and evil that she turns just about every scene into a delight.

Hurry back soon from hiatus, "Glee."

You could argue that "The Office" paved the way for this hilarious mockumentary. While that may be true, "Modern Family" seems to be improving on the format.

In a postmodern twist on the old "something for every member of the family" line, the show features a wise-beyond-his years kid, Manny (Rico Rodriguez); the midlife-crisis-prone Jay (Ed O'Neill); a gay couple raising a baby and various offshoots of a blended family.

The characters are rich, none more so than Phil (Ty Burrell), who strives so hard to be the hip dad to his kids that it's beyond embarrassing. Noting that he is down with the shorthand lingo young people use today, he translates "WTF" to mean "Why the Face?" Oh, Phil.

After a slow start in the fall of 2008, "Fringe" came into its own towards the end of the first season, doing a much better job than its fellow J.J. Abrams production, "Lost," of explaining just what it's actually about.

It definitely wins the award for the most shocking season finale of the year (yes, even above "Lost" itself) for the final shot in which (SPOILER!) viewers find out that Olivia Dunham's (Anna Torv) unplanned visit to the office of the mysterious William Bell (played by Leonard Nimoy, another surprise) is actually taking place inside the World Trade Center.

The plot twists and turns, coupled with the transformation of Olivia Dunham from a bit of a bore into an interesting character, have helped make this show destination viewing for fans.

This series is smart beyond the fact that it's centered around a bunch of geniuses.

Playing on the age-old trope of geeks as a source of humor, the show goes beyond just poking fun at a group of mega-intellectuals. Rather, the writers have created lovable characters whose beautiful minds are to be appreciated, as well as laughed at.

When the show launched in 2007, it was the little comedy that could, beloved by a core fan base and bloggers but failing to make big waves in the Nielsens. As the buzz built and the nerd herd cheered plotlines (including the appearance of "Star Trek: Next Generation" vet Wil Wheaton), the series became a ratings grabber.

Let's just get the obvious out of the way: this show doesn't suck.

Instead, let's focus on what made this show so bloody good this season: stories and characters that have bite to them, as well as lots of sex and violence served up among the residents of the steamy Louisiana town of Bon Temps.

In a year that continued the "Twilight" craze of vampires as sexy, misunderstood loners, "True Blood" featured a "good versus evil" battle in which it was hard to tell the good from the evil -- the blood-suckers or the cracked Christian cult out to destroy them.

Sookie (Anna Paquin) continued to heat things up with Bill (Stephen Moyer), a relationship made even more thrilling for "True Blood" worshippers given that the actors are engaged in real life. But they weren't the only passionate pair -- Jason (Ryan Kwanten), Sookie's less-than-bright brother, managed to hook up with Sarah (Anna Camp), wife of the leader of the Fellowship of the Sun church, for some graphic action that became water-cooler fodder.

Ted Crisp (Jay Harrington), how we heart you!

Never has research and development been more fun. The snappy dialogue, the ever-icy Portia di Rossi as Ted's boss Veronica, and the send-up of corporate America was often so deadpan that it took a minute or two to get the gag.

Every season, there seems to be a smart, quirk-filled show that viewers either really get or really ignore, and "Better Off Ted" fit that bill this year. Those who loved it raved about it, and those who didn't love it usually hadn't seen it.

CNN iReporters also weighed in on their picks for the best TV of 2009, and Showtime's "Dexter" won out.

The series about the serial-killing antihero had fans anxious and eager. Kathi Cordsen of Fullerton, California said, "Just waiting for all the suspenseful happenings, on the edge of your seat, shocking finale, waiting nine months for the next season to start --- That's a 'killer' show for you."

Other iReport picks included "Rescue Me," "Top Chef," "The Closer," "Curb Your Enthusiasm" and "The Amazing Race."