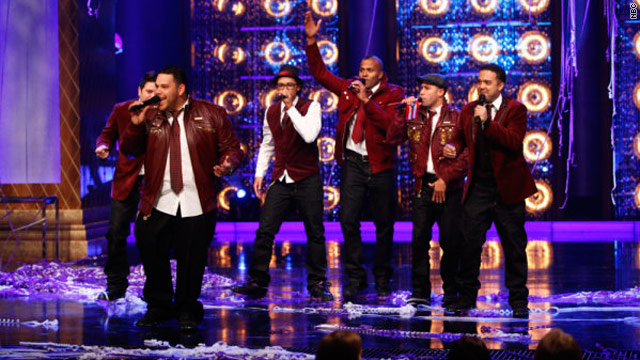 Nota, the doo-wop meets hip-hop sextet of a cappella singers, traveled from the Caribbean island to Los Angeles, California, and won the NBC singing competition "The Sing-Off" this week, along with $100,000 in prize money and a Sony recording contract.

"This is just a dream come true for us. I have to pinch myself to see if I am sleeping or awake," said Edgar Rios, 34, a pharmaceutical representative by day, singer by night. "This is a little bit like winning the lotto."

This group of 20- and 30-something family men who wowed America with their instrument-free rendition of Jay Sean's "Down" and Jason Mraz's "I'm Yours" have been singing together off and on for more than 15 years. They all have day jobs that keep them busy, but at night and on weekends they hook up to sing at parties, events or just for each other.

Two years ago Johnny Figueroa, 33, the group's bass singer, took a break from singing when he moved to Los Angeles with his wife, Merari, to focus on research work after getting his doctorate in biophysics. He was the first one to hear about auditions for "Sing-Off" over the summer.

"I am a freak for a cappella music, but I had given it up to focus on my career. When I heard the news that there would be this audition, I decided to give it one last shot. This was definitely my last shot," Figueroa said.

He started making calls back home to round up the five best singers he could find, all of them guys he knew and had sung with before.

Everyone he talked to was game to participate, but there were obstacles. Jose Rodriguez, 37, wanted desperately to join the group, but his wife, Melinda, was seriously ill with the H1N1 virus.

"When I got the call from Johnny, my wife was sick. She had been in the hospital on a ventilator for 30 days in a row. Her lungs had collapsed and at a couple of points I didn't know if she was going to make it or not," Rodriguez said.

The group went into the hospital and sang for her several times while she was unconscious. She slowly started to recover. "She was unsure about me leaving at first for the audition because she had been sick, but then she was so supportive," said Rodriguez. "She told me to go for it and follow my dream."

While he was mulling over the decision to go, Rodriguez called Edgar Rios. It turned out that Rios was also in the hospital, visiting his 4-year-old daughter, Edanice, who also had the H1N1 virus. Edanice recovered before Rios left, even though she had to celebrate her fourth birthday in the hospital in July. Now she is in Los Angeles getting ready to go on a holiday vacation with her mom and now-famous dad.

"I think all our families are first and foremost in our lives," Rios said. "We have to dedicate this honor to our families who have given us the strength and the support to follow our childhood and teenage dream."

David Pinto is the baby of the group at 25. He works in a sound studio for the Puerto Rican reggae recording artist Daddy Yankee. Pinto wasn't sure he could afford the cost of flying to Los Angeles for the auditions, but in yet another stroke of the good luck that has followed the group, Daddy Yankee offered to foot the bill.

The short four-episode series on NBC featured the talents of eight a cappella groups. Nicole Scherzinger from the Pussycat Dolls, Shawn Stockman from Boyz II Men and singer-songwriter Ben Folds were judges.

In the final episode of the show, which according to Nielsen ratings had 7.3 million viewers, Nota beat out two college singing groups: The Beelzebubs from Tufts University and The Voices of Lee from Lee University in Tennessee.

The men of Nota, already stunned by their win, were rendered speechless when they were actually joined on stage by Jay Sean while singing his song.

The group will travel home to Puerto Rico on December 29, where they are scheduled to be greeted with a heroes' welcome at the Plaza Las Americas, the largest mall in the Caribbean. At the start of the new year they will meet with Sony executives to plot the strategy for their album.

"We just want to bring our music to the people and bring hope and happiness to the families who hear us," Rodriguez said. "We have been doing this for 15 years and now we actually have the greatest opportunity of our life and we want to give back. We have been blessed and we want to bless other people."