Charlie Sheen's wife says he threatened to have her killed 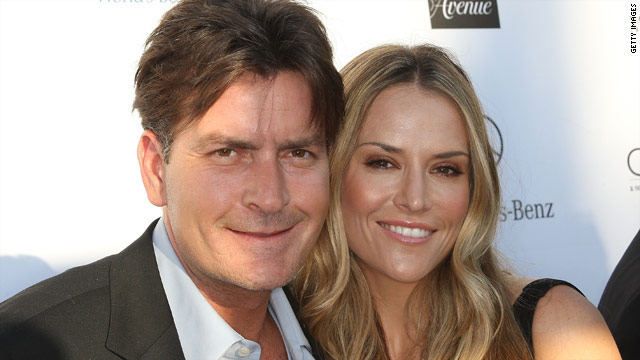 (CNN) -- Charlie Sheen's wife Brooke Mueller claims that the actor pinned her to a bed, held a knife to her throat and threatened to have her killed, according to her statement to Aspen County police.

"I have ex-police I can hire who know how to get the job done, and they won't leave any trace," Mueller alleges Sheen said to her as he held her down with a knife, according to an affidavit released by the Aspen Police Department.

After the incident that led to Sheen's Christmas Day arrest, Mueller told police she had told Sheen she wanted a divorce and would get custody of their two children. Mueller said he became enraged, straddling her, grabbing her by the neck and held a knife to her throat, threatening to kill her. The report notes red marks on Mueller's neck.

In his statement to police Officer Rick Magnuson, Sheen, identified in police documents by his birth name, Carlos Irwin Estevez, denies threatening Mueller with a knife or strangling her. He said he and Mueller had been having marital problems lately and that his wife had a problem with alcohol.

Sheen told police that the argument with his wife began at 3:30 am on Christmas morning and was instigated after Mueller became upset about a song that Sheen sang with his daughter from his second marriage to actress Denise Richards. Sheen said Mueller is jealous of his relationship with his daughter.

The actor claims that Mueller threatened to divorce him. He said he was upset by these threats because of his previous history.

Sheen admitted to officers that he and his wife had slapped each other on the arms. He said he snapped two pairs of her eyeglasses in front of her. Police said they identified the knife that Mueller claimed she had been threatened with. The folding, 4-inch knife was locked in the open position and found in Sheen's travel bag.

Sheen was charged with assault, menacing with a deadly weapon and criminal mischief. He posted $8,500 bond and was released.