Torre on book: 'It wasn't my intention to shock anybody'

(CNN) -- Los Angeles Dodgers baseball manager Joe Torre's new book about his old club has been burning up best-seller lists even before it hits stores. 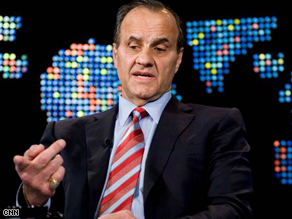 In "The Yankee Years," Torre candidly details his life as the former skipper of the team he led to four World Series titles. In the book, Torre slams some of his old players such as Alex Rodriguez and longtime Yankees owner George Steinbrenner.

In his first TV interview, Torre talked with CNN's Larry King about the controversial tell-all book. The following is an edited version of the interview.

Larry King: Did you ever think you would become, at this stage of your life and career, controversial?

Joe Torre: No. And I'm a little surprised, you know, not really, you know because it came out of New York and it involved the Yankees, obviously. You're always in the storm's eye, so to speak, when you're with the Yankees.

To me, the book is much more than controversial. I think it's very informative. I'm very proud of, you know, coupling with Tom Verducci and how he wrote this book.

King: Did you realize that some people might get upset at this?

Torre: You know I think there's always going to be something that someone is going to resent.

That's what I'd like to think that my reputation is -- being honest. I don't really think, it certainly wasn't my intention to shock anybody with stuff in this book. I just wanted to, you know, maybe put a heartbeat on some of these players that people think are robotic and basically tell the story -- and tell people my feelings -- of course, you know, the good years.

King: How about those who say you violated the code? That, like Vegas, what happens in the clubhouse stays in the clubhouse? Boomer Wells, a pitcher who certainly has his own problems and wrote a book himself, calls you a punk for breaking that code.

Torre: Well, Boomer and I have always had this type of relationship. We've had problems. But, really, I think we've always respected each other professionally.

King: All right, here's some of what you say in the book about Alex (Rodriguez) "When Alex came over, it became strained in the clubhouse. When it comes to a key situation, he can't get himself to concern himself with getting the job done instead of how it looks. Alex monopolized all the attention.

When Alex came over, he certainly changed just the feel of the club. And he needs all those statistics he needs every record imaginable."

TORRE: I can't disagree with any of that. I mean Alex is a special player. I don't think there's any player that's more talented than Alex Rodriguez. He cares very deeply about doing well. Baseball is his life. He puts a lot of pressure on himself.

And when he first came over, I mean you can't put an Alex Rodriguez into a clubhouse and not think it's going to change, just based on, you know, who he is, his ability and what he's done in the past.

Torre: The A fraud thing was more of a joking-type thing. I know Larry Bowa used to take him out to hit ground balls after he had maybe a bad night or had made an error, and he says, 'Who is it today, is it A-Rod or A-Fraud?'

It was right there in front of him. It wasn't like anything was said behind his back.

King: When did you last have contact with A-Rod?

King: Do you think you'll hear from him?

Torre: I don't know. I may. As I say, I don't think there's anything in this book that's going to, you know, make Alex angry.

King: You say you never got trust from the Yankee front office, not even when you were winning. You say it bothered you. So were you even, during the winning years, angry inside?

Torre: I wouldn't say they didn't trust me. You know, the thing is George, God love him, he, you know, always wanted to go to the whip. George is that kind of owner that, you know, wants to be in total control. And, again, he really didn't give you an opportunity to enjoy what you had done, because he was always striving for the next good thing to happen.

King: So then it wasn't fun?

King: You have had some tough stuff to say about Steinbrenner. Here's a couple quotes. "He would be a tyrant who would second-guess a lot of stuff" that you did. "He was resentful of the credit I got." He wanted to scare you in front of other people. It drove him nuts when it made sense when I talked to him.

Torre: That's not saying bad things about him.

Torre: That's not. All of those things I think George would be proud of,

King: Are you proud of it?

Torre: Yes. He liked being the boss. Everybody in the world knows he's tough. They know he, you know, can threaten you at any time, but that was the excitement. The thing that I kept telling George -- I want to make him proud of what we are doing, and for a long period of time, we did do that.

King: On steroids, you write you never saw it. Players never talked about it. You said you respected guys' privacy?

Torre: I always did that, even before the steroid issue. I never went in players lockers or tried to sneak around the corner. In regards to steroids, I think we're all to blame, all of baseball. I never realized how far reaching this problem has been. I'm not saying that we as managers and coaches, that you don't look across the field and said, 'you know, this guy has gotten big from last year, and stuff like that.' But again, it's not like loading a bat.

I was always a little hesitant to accuse people of loading a bat to hit a ball farther. I was always very hesitant to approach people because I never had any evidence that I had firsthand knowledge of.