(CNN) -- Horton Foote, the Pulitzer Prize- and Academy Award-winning screenwriter of "To Kill a Mockingbird," has died, according to officials at the Hartford Stage theater, where he was working on a production of several of his plays. 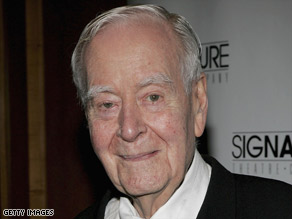 Horton Foote won Oscars for his "To Kill a Mockingbird" and "Tender Mercies" screenplays.

Foote was born in Wharton, Texas, and, at age 16 moved to California to study acting. He would later move to New York, where he would transition to writing for the stage, television and movies, according to the Internet Movie Database.

He won the Oscar for best adapted screenplay in 1962 for his reworking of Harper Lee's classic novel "To Kill A Mockingbird," and another for best original screenplay in 1983 for "Tender Mercies," which starred Robert Duvall as a down-and-out country singer.

He also was nominated for 1985's "The Trip to Bountiful."

In 1995, his play "The Man From Atlanta" was awarded the Pulitzer Prize for drama.