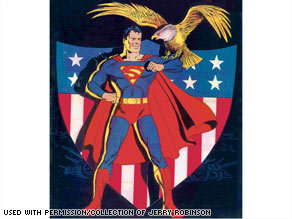 More than 70 years ago, the very first superheroes debuted in the dire times of the Great Depression and the early years of World War II. Their names became legend -- Superman, Batman (or, as he was then known, the Bat-Man), Wonder Woman, Captain America -- and they're still with us today.

A new exhibit at the Skirball Cultural Center in Los Angeles celebrates these icons from the Golden Age of Comic Books. Through a collection of rare original artwork and comics, the exhibit explores how a group of mostly Jewish artists created the costumed heroes who came to symbolize the hopes of a beleaguered nation.

"In the 1930s, the American Dream had become a nightmare, and I think comic books and superheroes in particular provided an escapist form of entertainment that allowed the American public to go into a fantasy world where all the ills of the world were righted by these larger-than-life heroes," says Erin Clancy, a curator at the Skirball.

Watch a tour of the exhibit »

Guest curator Jerry Robinson not only organized the exhibit, he's a part of it. The comic book pioneer created Batman's arch-enemy, The Joker, and named the caped crusader's sidekick Robin. (Success has many fathers, of course: Bob Kane, credited with creating Batman, has long disputed elements of Robinson's creation stories.)

Robinson says the villains changed with the times. "The first villains in the comic books were hijackers, embezzlers, bank robbers. It was the era of Pretty Boy Floyd and so forth. Once the war came along, we felt a need for more patriotic heroes to fight Hitler.

One of the highlights of the collection is Robinson's original sketch for The Joker. "My first thought was that a villain who had a sense of humor would be different and memorable," he says. "So, I'm thinking of a name for a villain that has a sense of humor. I thought of 'The Joker' as a name, and as soon as I thought that, I associate it with the playing card, as my family had a tradition of champion playing; my brother was a contract champion bridge player. There were always cards around the house.

"So I searched, and luckily it had the typical image of the joker, which came out of a tradition in Europe. This was an important element. Throughout history, we had court jesters, clowns, and so this was an iconic image that was also very useful."

In our own times, the public is turning to costumed heroes again in record numbers. Movies based on comic books are box office leaders; comic books themselves remain a strong and growing industry.

"I think the comic book superhero came out of a context in which the political, social and economic realties were a little tough," Clancy says, "and we can certainly relate to those realities now in our own day. I think the resurgence of popularity of superheroes can be attributed to that."

Last year, audiences made "The Dark Knight" the second-highest grossing film of all time. The late Heath Ledger, who won a best supporting actor Oscar for his performance as The Joker in that film, spoke with Robinson before he died.

With the box office success of "The Dark Knight" and "Iron Man" -- plus comic book-inspired films like "The First Avenger: Captain America," "The Avengers" and "Thor" in development -- it looks like superheroes will continue to inspire.

"I think heroes are back," Robinson says. "I think you can almost chart it. The times are not so good -- we're looking for heroes."

All images and characters copyright DC Comics. DC Comics, like CNN, is a unit of Time Warner.

All About Graphic Novels and Comics • Movies • Heath Ledger