Excerpt: Betting my last dollar on a horse

Editor's note: Below is an excerpt from Larry King's autobiography, "My Remarkable Journey," published by Weinstein Books and available at bookstores nationwide. Larry King anchors "Larry King Live at 9 p.m. ET on CNN. 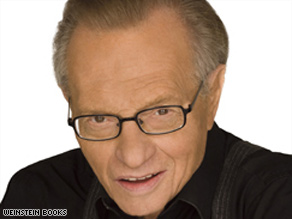 Larry King recalls a much-needed win at the track during one of the lowest points of his life.

I was thirty-seven years old. (In 1971). I had no job. I had a couple hundred thousand dollars in debts. And a four-year-old daughter. I'd take Chaia to our secret park on our visiting days. That's when the pain cut the deepest -- looking at my daughter and knowing I had no way to support her.

Things got bleaker and bleaker. I became a recluse. By late May, I was down to forty-two dollars. My rent was paid only until the end of the month. I locked myself in my apartment wondering how bad things could possibly get. Pretty soon I wouldn't even be able to afford cigarettes. I remembered a night when I was a young man in New York, alone, cold, and without cigarettes or the money to buy them -- I had smashed open a vending machine to get a pack.

A friend called up and told me to start living like a human being again. He invited me to the track. I had nothing better to do, and I figured it would be good therapy to get out and have lunch with a friend and watch the horses come down the stretch.

I'll never forget that day. I put on a Pierre Cardin jeans outfit that had no pockets and drove to Calder Race Course. I can still see the horses warming up before the third race. There was a horse called Lady Forli -- a filly running against males.

Normally, female horses don't beat males. We're talking cheap horses. I scanned the board and saw that she was 70-1. But my eyes really opened when I looked at the racing form. Racetrack people talk to each other. So I turned to the guy next to me and said, "You know, this horse, three races back, won in more or less the same company. Why is she 70-1?"

Screw it. I bet ten dollars on the horse to win. But I kept looking at the horse. The more I looked at this horse, the more I liked it. So I bet exactas. I bet Lady Forli on top of every other horse and below every other horse. Now I had what's called a wheel.

I kept looking at the horse. Wait a minute, I told myself, I've got four dollars left. I have a pack of cigarettes. I've gotta give the valet two bucks. That still leaves me with money to bet a trifecta.

When the race began, I had two dollars left to my name -- and that was for the valet.

They broke out of the gate. The 1 broke on top, the 9 ran second, and the 11 came out third. The 11 passed the 9, passed the 1, and they ran in a straight line all around the track. There was no question about it. The 11 won by five lengths. The 1 was three lengths ahead of the 9. I had every winning ticket. I had it to win. I had the exacta. I had the trifecta. I collected nearly eight thousand dollars. Eight thousand dollars!

It had to be one of the happiest moments of my life -- certainly the most exciting. But I had no pockets.

So I stuffed all the money in my jacket. It was bundled up. I didn't know what to do with it. I ran out of the track. The valet attendant came over and said, "You leaving so early?"

I tipped him fifty dollars. The guy nearly fainted.

I had to go somewhere, to stop and make sure it was real. I drove to a vacant lot, which is now called Dolphin Stadium. I parked among the weeds and opened up my jacket. All the money spilled out. I counted out about seventy-nine hundred dollars.

I paid my child support for the next year. I paid my rent for a year. I bought twenty cartons of cigarettes and stacked them up in my apartment, and I filled the refrigerator.

Up to that point, that may have been the happiest moment of my life. Now, today, if I go to the track and win $8,000, it's very nice, but it won't affect my life one iota. It's nice to win. But when you really need it ...