New chapter for Nancy Grace with her first novel

Editor's note: Nancy Grace is the host of "Nancy Grace" on HLN nightly at 8 and 10 p.m. ET. Read an excerpt from her new novel "The Eleventh Victim" published by Hyperion. 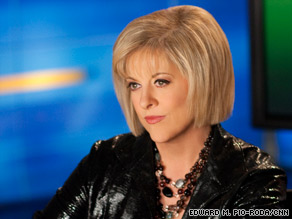 Nancy Grace found it challenging to complete her first novel, "The Eleventh Victim."

(CNN) -- Readers of Nancy Grace's debut novel, "The Eleventh Victim," would be forgiven if they assumed the main character is based on Grace.

After all, the heroine of the novel becomes an Atlanta, Georgia, district attorney after her fiancé is murdered and later relocates to New York for a fresh start.

But Grace said there are some differences between her and her protagonist. "Hailey is a much better person than I am," Grace said.

The tough-as-nails anchor of the HLN show that bears her name was driven to complete her first book of fiction, which she said has been in the works for almost a decade.

The novel centers on the character of Hailey Dean, a psychology student who becomes a prosecutor after the tragic murder of her fiancé just weeks before their wedding.

The mystery takes flight when Dean, having relocated to Manhattan and trained as a therapist, discovers that her patients are being murdered in a copycat style of an Atlanta serial killer from her past.

Grace -- who is also the author of the nonfiction book "Objection!" -- recently spoke to CNN about the challenges of giving birth to both twins and a thriller, who might die in her next novel and what she thinks about television shows like "Saturday Night Live" parodying her.

CNN: You are a working mother of two year-old twins. How in the world did you find time to write a book?

Nancy Grace: It was hard work. I had done "Objection" and I had an idea for a second nonfiction. I went back to my editor and I said "Here's an idea for another nonfiction." She said "Yeah, it's OK, you got anything else?"

I said "No, but I do have an old manuscript I've been working on for a long time, a murder mystery." I told her it's not finished yet, I have about 300 pages.

I took it over that day and the next day they told me they wanted a two-book series on Hailey Dean. Then I thought "Oh Lord, now I've got to finish it." That happened around the time I got pregnant.

I had a difficult pregnancy. I was in a wheelchair, I threw up every day, I broke my foot during the pregnancy, so a lot of crazy things happened. Finally, after the twins came, the deadline came.

I literally had to sit in the bed with the computer and force myself to finish it. I knew what was going to happen in each of the four storylines, but I had to get there.

I would be up sometimes until 3 or 4 in the morning. The twins, one would wake up, by the time I would get that one fed and down, the other one would wake up and then it was time to get up at 5:30.

CNN: You said you knew who did it in terms of the mystery early on in the writing. So how did the book change during its development?

Grace: The characters really developed. It's like getting to know a person. Read an excerpt from the novel

CNN: The plot and the settings sound very familiar to your own life. How much of you is in Hailey?

Grace: Hailey is a much better person than I am, I can tell you that much. She's very brave. She thinks her way out of difficult and almost impossible situations, she's courageous and she's witty.

I would say it's loosely based, but she's a much better heroine than I could ever be.

CNN: What is more difficult, writing nonfiction or fiction?

Grace: It is definitely harder to write fiction.

With nonfiction you deal with facts already in existence, but with fiction you have to create everything. Details like what color somebody's hair was to how hot it was that day.

CNN: Is there anything that didn't make it into this book that you wished had?

Grace: Yes, but don't worry because I saved it for the next book, which will be set in the television industry. There's going to be a lot of dead TV executives (laughing).

CNN: They say imitation is the sincerest form of flattery, so what are your thoughts on having been parodied?

Grace: It's funny to me. Everything from YouTube to "Boston Legal" and "Saturday Night Live." It's very flattering that they would think enough to make fun of me.

I want [rapper] Eminem to make fun of me, but I don't think it would be very nice (laughing).

All About Nancy Grace • Books