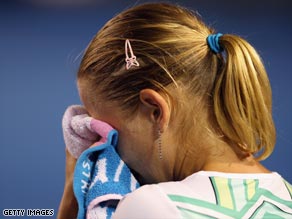 The emotion of victory proves too much for Dokic -- who is on the comeback trail.

Dokic is rapidly becoming the story of the opening grand slam of the year after being granted a wildcard to appear for her adopted country.

The Serbian-born star reached as high as world number four in 2002 before her career suffered after a series of disputes with her father Danic.

She is currently 187th in the world rankings, but produced a performance against Chakvetadze which showed her true quality.

The 15,000 spectators packed into the show court at Melbourne Park erupted as she sealed victory after two hours and 16 minutes while Dokic openly wept in her chair.

Playing again under the Australian flag after a brief flirtation with Serbia -- encouraged by her now estranged father -- Dokic admitted it had been a mistake. "You know, I will regret the decision that I made," she was quoted on the official tournament Web site. "I can say that I made it under the influence of my dad, but I will regret leaving for the rest of my life.

"It will always be the mistake that I made," added Dokic who said the crowd's reaction was "really amazing."

The 25-year-old made a confident start as she took the opening set in just 36 minutes.

But the nerves really kicked in as she served for the match at 5-3 in the second, denied by dogged play by Chakvetadze, who eventually leveled after a tiebreaker.

Dokic broke in the first game of the decider and held on, nervily at times, to lead 5-3.

Chakvetadze, who reached the quarterfinals at the 2007 Australian Open, was also faltering under pressure and double-faulted to hand Dokic match point.

Dokic, who will face 11th seed Caroline Wozniacki for a place in the last 16, first made headlines when she beat defending champion Martina Hingis at Wimbledon in 1999.

She also reached the semifinals of the 2000 Wimbledon and Sydney Olympics, but all the time her father's erratic behavior was making unwanted headlines.

He smashed a journalist's phone at Wimbledon, alleged the Australian Open draw was rigged -- after which Dokic switched to Serbia -- and was thrown out of the U.S. Open after another row.

Dokic has been slowly returning to competitive tennis, winning three second tier tournaments in 2008 and claiming her wildcard place for the Australian Open.