(CNN) -- World number one Jelena Jankovic slumped out of the Australian Open on Sunday with a disappointing 6-1, 6-4 loss to Marion Bartoli of France, dashing her bid to win her first Grand Slam tournament. 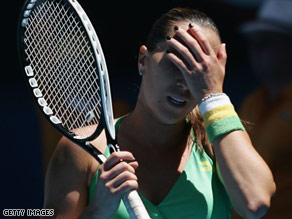 Jankovic reacts after a point in her fourth round Australian Open match on Sunday against Bartoli.

The 23-year-old Serb, who reached the top ranking at the end of 2008, made 15 unforced errors and had 17 winners -- the last stat being half that of former Wimbledon finalist Bartoli.

Jankovic, who had prepared for the Australian Open in the punishing heat of Mexico, had hoped that winning her first Grand Slam would silence those who have questioned her right to the top spot without having won a Grand Slam title.

But the match of the day in the men's draw was Chilean 13th seed Fernando Gonzalez's five set, four-hour victory over Richard Gasquet of France.

Gonzalez, the runner-up to Roger Federer in 2007, will have to be at his very best to test Nadal, who overpowered Haas with his strong groundstrokes.

The Spaniard, chasing his first Australian Open victory, found himself 2-0 down early in the match, but broke back immediately and then in the fifth game to assume control -- which he never relinquished.

Murray next takes on Spanish 14th seed Fernando Verdasco, who was a comfortable 6-4, 6-0, 6-0 winner over Radek Stepanek of the Czech Republic.

On a good day for the leading seeds, fifth-ranked Jo-Wilfried Tsonga of France, the runner-up last year to Djokovic, beat Dudi Sela of Israel.