(CNN) -- Serena Williams will be bidding for her 10th grand slam triumph and fourth Australian Open title when she plays Russian Dinara Safina in Saturday's final in Melbourne, with the world number one ranking also up for grabs for either player. 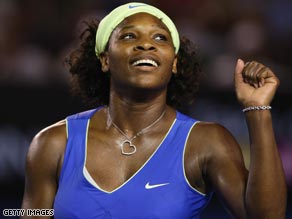 Serena Williams is bidding for her 10th grand slam triumph in the final of the Australian Open.

Safina will emulate her brother Marat Safin if she takes the top ranking by winning her first grand slam -- but Serena has other ideas and is intent on reaching double figures for slam triumphs.

"Like, I'm sure that people have 10-plus Grand Slams get special letters. I'll be part of a really elite club," she was quoted on the official tournament Web site www.australianopen.com.

Dementieva, who went into the semifinal off the back of two titles and unbeaten in 2009, was no match for her American opponent, who showed her best form of the tournament when it really mattered. A single break of service was enough for Williams to take the opening set, before a topsy-turvy second.

Fourth seed Dementieva broke early but back came Williams with a break of her own to level. Helped by nervy double faults from her opponent, Williams moved a break ahead herself, only for her opponent to level with determined play.

But another service game punctuated by a double fault saw Dementieva broken on her own delivery again to allow Williams to serve out for victory.

"I played a lot of matches. I won all of them. And I feel like today I was not quick enough. I was not maybe aggressive enough against her. But I have no regrets. I had just a great time here, " Dementieva said.

Later Safina did just enough in a scrappy second semifinal to beat compatriot Zvonareva in straight sets. The world number three had put out crowd favorite Jelena Dokic in the quarterfinal and drew on that experience to take an early 2-0 lead.

Zvonerava, in her first grand slam semifinal, broke back but lost her service again to love in the seventh game as Safina went on to take the opener.

The second set proved even closer with Zvonareva breaking for the first time to lead 3-2 only to throw away the advantage in the next game.

The seventh seed pulled ahead again to serve for the second set at 6-5, but was broken again by Safina who proceeded to take the tiebreak and claim her place in the final.

Williams will start as marginal favorite but is taking nothing for granted. "This is definitely not over. I have to play a really tough opponent who wants to win, you know. It will be their first Grand Slam," said the American. "That's super exciting. Who doesn't want that? So I'm already focused," she said.