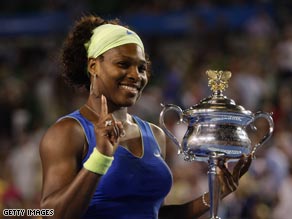 The second-seeded American was winning her 10th grand slam crown and takes over from Serbia's Jelena Jankovic as the women's world number one after the one-sided win.

"I definitely think it was one of my most dominant performances, especially considering it was a final. I was able to just lift the level of my game," Williams was quoted on the official tournament Web site www.australianopen.com

Safina could also have claimed the top spot in the global rankings, but from the moment she produced three double faults in her opening service game was on the backfoot.

Williams swept through the first set in just 22 minutes as she produced a string of clubbing winners against a nervous and outclassed opponent.

Third seed Safina gained a measure of respectability as she broke Williams at the start of the second set, but was immediately broken back to snuff out any hopes of a revival.

The 27-year-old Williams produced a further break to eventually wrap up victory in just 59 minutes.

She becomes the seventh woman in tennis history to win 10 or more grand slam singles titles.

It also completed a triumphant tournament after wrapping up the doubles title with sister Venus on Friday, their eighth grand slam success.

Safina, the sister of men's star Marat Safin, was left to contemplate a comprehensive defeat for the second time in a grand slam final, having lost to Ana Ivanovic for the French Open last year.

She admitted that nerves had played a part in her below-par display.

"Well, I would say so. You know, it was first time for me to play not only for the Grand Slam, but it's also for No. 1 spot.

"And I never been through this situation, you know, and she was already," Safina said.