(CNN) -- Pakistan cricketers have been told they will not be allowed to appear in the highly-lucrative Indian Premier League (IPL) this coming season because of fears over security. 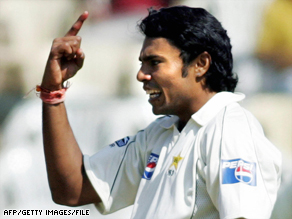 Danish Kaneria, in action against India last December, was hoping to play in the Indian Premier League.

Stars from Australia, New Zealand, South Africa, Sri Lanka, West Indies and, for the first time, England will be competing in the action that starts on April 10.

Several Pakistan stars had also signed for IPL franchises while another five, including leg-spinner Danish Kaneria, were scheduled to appear at a players' auction to be held in Goa, India, on Thursday.

However, the Pakistan Cricket Board (PCB) said players would not be allowed to play in the IPL this coming season on government advice.

"We have informed the IPL and Indian board that our players can't take part in the IPL this year," PCB chief operating officer Saleem Altaf told Reuters.com.

The decision follows concerns for players' safety because of the tense relations between Pakistan and India after the Mumbai militant attacks in November.

Former Pakistan captain Shoaib Malik, who plays for Delhi, said the players would abide by the directives of the government and PCB.

Provincial Sindh High Court on Monday suspended the 2007 action taken by the PCB which must appear in court later this month to explain their action.

Players affected by the 2007 ruling also include Mohammad Yousuf, Imran Nazir, Mohammad Sami and Azhar Mahmood who along with Inzamam, played for Lahore Badshahs. Last year, the Badshahs named after a Pakistani city and with a number of Pakistani players won the ICL 20s Indian championship.

"The honorable court has suspended this relevant clause of the PCB rules and allowed the players to appear in domestic cricket with immediate effect," Zahid Fakhruddin Ibrahim, the legal counsel for the players, told Reuters.com.

Lahore coach Moin Khan, a former Pakistan captain, said the suspension of the ban was good for Pakistani cricket.

"Some of the ICL players can still play for Pakistan and when they play in domestic cricket, youngsters will learn from them," Khan commented. "The ban had hurt the players financially as well as cricket-wise, so it's a great decision."