LONDON, England (CNN) -- The polite hush that descends on the crowd seconds before service is nowhere to be heard when it comes to the issue of equal prize money in women's tennis. 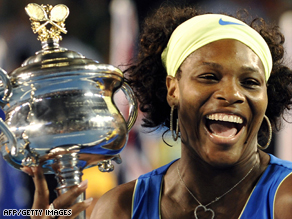 It may be two years since Wimbledon and the French Open joined the other major tournaments in offering women the same cash prize as men, but for some tennis fans the issue is far from resolved.

"Admit it sisters," screamed one recent headline on Australian Web site AdelaideNow, "this is not equal."

The author went on: "Political correctness, sexual equality and feminism all prevent many commentators from stating the bleeding obvious ... no sports watcher in their right minds could honestly say female tennis players, or golfers for that matter, deserve as much money as their male counterparts."

The writer -- a woman -- went on to lambaste the world's best female tennis players, describing world number one Serena Williams' defeat of Dinara Safina in the Australian Open final as "embarrassing, pitiful and pathetic."

"Her humiliation of Dinara Safina was a terrible advertisement for a sport that has apparently disappeared up its own backside."

Rather than provoking a tirade of abuse, many readers agreed with the author, outspoken Australian journalist and sports commentator, Rebecca Wilson.

Another added: "It's about time someone said what everyone was thinking." More chimed in: "Everyone agrees, few will say it" and "totally agree. Women's tennis is pathetic."

A couple of dissenters in the crowd urged Wilson to turn her attentions elsewhere: "The usual tripe that Wilson dishes up week after week," and "please go away and let someone with something important to say use your space." What do you think? Do women deserve equal prize money in tennis? Sound Off below.

Billie Jean King has heard it all before. The former world number one has spent a good part of the last forty years campaigning for equal prize money, and equal status, for women.

The decision by the All England Tennis and Croquet Club in February 2007, and then the French Open one day later, to award equal prize money to women marked the end of a fight that started in 1968, the first year of Open tennis.

"I knew then that was going to be one of our next battles that we would have to fight over the years," she added.

King hoped to put the matter to rest in 1973 when she took on self-proclaimed male chauvinist Bobby Riggs in now famous match known as "The Battle of the Sexes."

Riggs, a former men's number one, claimed the women's game was so poor that even he, as a 55-year-old retiree from the sport, could beat the top female players.

King accepted the challenge and thrashed Riggs 6-4, 6-3, 6-3 in front of a television audience of millions.

Those who argue for lower pay for women's tennis say they play fewer sets and attract a smaller television audience so they should receive less money.

Campaigners for equal pay say that it's not an issue of time on the court, but an matter of fair and equal treatment

As current world number six Venus Williams once argued in an open letter published in The Times, "we enjoy huge and equal celebrity and are paid for the value we deliver to broadcasters and spectators, not the amount of time we spend on the stage."

What do you think? Should the top female tennis players be taking home the same prize money as men? Sound Off below.

Revealed: Venus Williams airs on CNNI at on the dates and times below:

All About Grand Slam Tennis