(CNN) -- World number one Rafael Nadal will lock horns with second seed Andy Murray in the final of the ATP tournament in Rotterdam on Sunday. 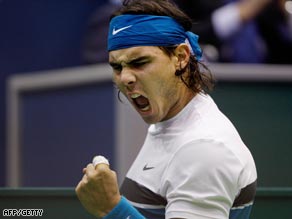 Nadal was fired up as he reached a final showdown with Murray.

Australian Open champion Nadal beat Gael Monfils of France in the second semifinal after Murray had continued his superb form in 2009 with a straight sets dismissal of Croatia's Mario Ancic.

The Scot had lost three of his four previous meetings with Ancic but the 6-1 6-2 scoreline reflected his dominance in a clash which lasted just 61 minutes.

Nadal later showed his best form of the week to beat the dangerous Monfils 6-4 6-4 in one hour 42 minutes.

Murray was unbeaten going into the first grand slam of the season, but went out in five sets to Spain's Fernando Verdasco in Melbourne.

Any disappointment from missing out in Australia has not been in evidence on the fast indoor surface being used for the ABN-Amro world tournament, with Murray breaking at the first opportunity.

Murray held to love to take a 3-0 lead before Ancic finally got on the scoreboard by holding in the next game.

But a further break completely undermined the former world number seven and Murray took the set in just 25 minutes.

Ancic showed little of the form that had seen him put out fourth seed Gilles Simon of France in the second round and was immediately broken at the start of the second set.

Murray held service, for once put under pressure, but a further break on the Ancic delivery all but handed him the match.