(CNN) -- Second seed Andy Murray collected his 10th career title after defeating world number one Rafael Nadal, who was hampered by a knee injury, 6-3 4-6 6-0 in the final of the ABN AMRO tournament in Rotterdam on Sunday. 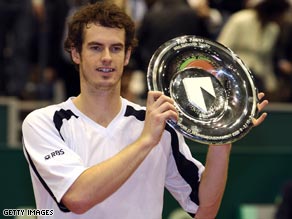 World number four Murray was himself carrying an ankle injury he picked up during his quarterfinal win over Marc Gicquel, but showed little signs of early discomfort as he raced around the court before burying two forehands to take his first service game.

Nadal held before spurning his first break point to allow Murray to take a 2-1 lead and the match stayed with serve as Murray let a 0-30 lead slip to lose the fourth before he thundered an ace down on the way to take a 3-2 lead despite his second double fault of the game.

A series of unforced errors from the Spaniard gave the Scot two break points and he seized the opportunity at the second attempt when Nadal sent a forehand long to give Murray a 4-2 lead.

Murray held before Nadal found top gear to win the eighth to love but a composed Murray showed no nerves as he clinched the first set by holding his service game to love.

The 21-year-old Murray carried his momentum into the second set by keeping Nadal pinned to the baseline but the Spaniard was equal to Murray's efforts and held his first service game.

Pinpoint-serving allowed Murray to level before the Briton took the third game to deuce thanks to an incredible pass after a powerful Nadal smash at the net.

However, the Spaniard responded in clinical fashion to take a 2-1 lead before receiving treatment to his right thigh. The interval seemed to affect Murray's concentration as he ploughed a simple forehand into the net to allow Nadal to break.

Both players then failed to hold serve for the remaining six games of the set before Nadal clinched the second set 6-4 when Murray hit a backhand long.

Murray broke Nadal's first game in the third to love before holding to take a 2-0 lead. Nadal's right knee seemed to be causing him problems and he double-faulted on the way to allowing Murray to break again to give the Scot a commanding lead.

He won the next two games with ease before breezing past the despondent Nadal with an ace in the sixth to pick up his second title of the year.

Murray was happy to have defeated the world number one for the second time this year, but admitted he would have liked to have beaten a fully-fit Nadal.

"It is a shame for him after he injured his knee at the start of the second set. The play was up to a good standard in the first set," Murray told Sky Sports.

"I'm happy to win but I would have preferred it if he wasn't hurt. I have started well this year. I would have liked to have done better in the Australian Open but I got better here as the week went on and I'll try and keep it going now."

The Czech will now face fifth seed Mardy Fish, who beat James Blake 6-3 6-2 after his fellow-American was hampered by an ankle injury.