(CNN) -- The only thing Venus Williams treasures more than winning is a decent nap. 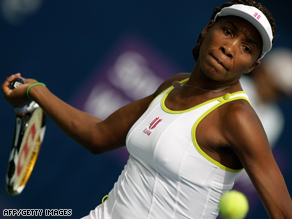 Just before a match, when other top tennis players might be psyching themselves up for a three-set onslaught, the elder of the Williams sisters can be found somewhere private, snoozing.

"I'm always sleepy," she told CNN in an interview for this month's edition of "Revealed."

"I'm literally taking a nap during the first set and the match before me, so I'm probably the only person that can go to sleep, come out 15 minutes later and start playing."

Wary of sending the wrong signals to her rivals, the sixth seed confessed to CNN that she prefers to take her naps in private.

"I'm wondering if my competitor is going to see me here, so I try to act like I'm not asleep, but I am asleep, or I try to find a place where I can sleep in and no one will see me," she laughs.

The lightning-fast speed of Venus' serve is at complete odds with her personality. She is strong, ambitious and determined, but also surprisingly laid-back for someone whose professional career is about playing harder, longer and faster.

"I just always go with the flow," she told CNN. "On the court, that's when I get most intense. In practice, I scream and yell and threaten to throw my racquet but in the match I'm not like that at all."

Her younger sister, world number one Serena, sounds almost envious of Venus' ability to keep her emotions in check.

"On the court she's always really focused. She always has this quiet tenacity and she never really shows her emotions which I think is good."

The youngest of five sisters, Serena says she continues to draw inspiration from her closest sibling.

Venus is just 15 months older than Serena. She set the marker for success in 2002 when she became the first of the sisters to become world number one. Serena first took the title in July of the same year and reclaimed it earlier this month.

If they once struggled to find the required ruthlessness to eliminate each other from a competition, it is clearly no longer a problem.

Of 18 matches they have contested, each sister has won nine. At the time of writing, there is every chance they will meet again this week in the semi-final of the Barclays Dubai Tennis Championships.

They last clashed at the Sony Ericsson Championships in Doha in November 2008 when Venus dispatched Serena in three hard-fought sets before going on to win her first end of season title. Watch Venus take the title

Asked after the match about accusations they don't play as hard against each other as they would normal rivals, Venus replied, "You have to play hard against a Williams or you are going home quickly. We try our hardest and I think that everyone knows that by the effort level."

Their mother, Oracene Price, told CNN she keeps her advice on the subject simple.

"I just tell them to remember they are sisters and how love and how to care for one another is more important than anything," she said.

"So, this is just a game and eventually it would be over and you will have to live with each other. So, just go out there and do your best and whoever wins, wins. And whoever loses, better luck next time."

Having said that, Price admits she keeps her distance from whoever comes out second best, in any match.

There was no need for tip-toeing after the second round of the Barclays Dubai Tennis Championships. Venus made fast work of Russian Anastasia Pavlyuchenkova, beating the 17-year-old 6-0, 6-1 in less than one hour.

Venus told CNN her ambition this year is to topple Serena to become the world number one. "I think I am in a great position to do that," she said.

Watch Venus Williams on Revealed this week at the times below: