(CNN) -- An all-American team is set to enter Formula One in 2010 -- bucking the global economic downturn which has forced motorsport's elite category to introduce a series of cost-cutting measures. 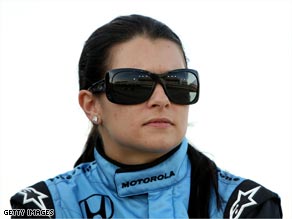 While established teams such as Honda are struggling to survive, proposals for the new line-up were revealed in a broadcast on Speed TV in the United States.

The proposed USF1 team is the brainchild of sporting director Peter Windsor and former F1 designer Ken Anderson, who have ambitious plans to join the grid in less than 12 months time.

The team will be based in North Carolina, the heartland of the NASCAR stock car series, but have still to finalize an engine supplier and confirm sponsors.

"When we realized that the technology was here and with the help of the new FIA regulations -- that were made for new teams to come into the sport -- we thought we could do a team here in the United States and that it was going to be a car made in America," Windsor told Speed TV.

"The logical thing then from a marketing perspective was to see if we can have two American drivers. And that is indeed what we intend to do."

Windsor added that they had the backing of Formula One supremo Bernie Ecclestone who told him "great, get it done."

The USF1 team is expected to have a budget of roughly $60 million per year, but their anticipated arrival comes at a time when F1 does not have a race in the United States and Canada and with no drivers from North America.

The possible loss of Honda from the 2009 grid prompted world governing body the FIA to introduce a series of measures to make it cheaper to run a team in the world championship.

Windsor sees this as a major opportunity: "Long before the current economic recession, we were thinking "lean, mean"," he said.

"We were questioning why the existing F1 teams needed to spend hundreds of millions of dollars in not winning races; and we were convinced that not only could an F1 be designed and built in the USA but also that we could base the team in America, too."

Meanwhile, troubled bank Royal Bank of Scotland (RBS) will end its sponsorship of Formula One team Williams as a result of the economic downturn.

The announcement comes on the eve of a new low in business when RBS will mark the biggest ever loss in British corporate history.