(CNN) -- Israel reached the Davis Cup quarterfinals for the first time since 1987 after a dramatic 3-2 victory over Sweden staged behind closed doors and against a background of violent demonstrations in Malmo. 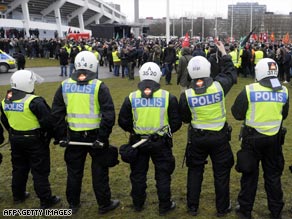 Swedish riot police face an anti-Israeli demo outside the Baltic Arena in Malmo where a Davis Cup tie took place.

Dozens of protesters clashed with police outside the Baltic Arena at the weekend as violence erupted on the sidelines of an authorised demonstration of some 10,000 people against Israel's recent offensive in Gaza.

Israel's next tie is at home to Russia in July after Harel Levy held his nerve to defeat Andreas Vinciguerra 6-4 4-6 6-4 3-6 8-6 in just over three and a half hours after Israel began the final day of the World Group first round tie 2-1 down.

Earlier Dudi Sela also needed five sets to fire Israel onto the comeback trail with a 3-6 6-1 4-6 6-4 6-2 success over Thomas Johansson against an eerie background after Malmo city council refused to allow spectators because of security fears.

World number one Rafael Nadal clinched a 4-1 win for holders Spain against Serbia when he defeated Novak Djokovic 6-4 6-4 6-1 on Benidorm's clay court.

Spain now have a home date with Germany who edged Austria 3-2 thanks to Nicolas Kiefer defeating Jurgen Melzer 7-6 6-4 6-4 in the first of Sunday's singles.

Andy Roddick delivered the decisive point as the United States wrapped up a 4-1 victory over Switzerland at Birmingham, Alabama.

Victory sent the 32-time winners America into a quarterfinal away to the 2005 champions Croatia in July -- the weekend after Wimbledon - with the Europeans holding a 2-0 record in the series.

With the U.S. taking a 2-1 lead into the final day of action, Roddick hammered out a 6-4 6-4 6-2 victory over Stanislas Wawrinka in Sunday's first reverse singles.