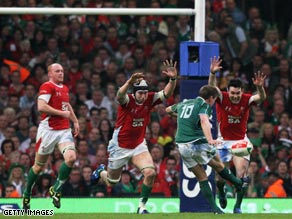 Ronan O'Gara kicked the winning goal near the end of the match, setting off celebrations across Ireland.

The Six Nations competition brings together rugby teams from Ireland, Wales, France, Scotland, England and Italy. A "grand slam" is a perfect season - when one team beats all five other teams with no losses.

Ireland's undefeated record hung in the balance as a penalty kick from Wales' Stephen Jones fell short in the final play of the game, securing the Irish 17-15 win.

Wales would have had to win the match by 13 points in order to keep its Six Nations title, which Wales won last year with a grand slam in the competition.

Ireland's last Grand Slam was in 1948. It last won the multi-national championship in 1985.

The international competition traces its history back to 1883 when it began as the Home Nations Championship. The competition was known for decades as the Five Nations until 2000, when Italy joined.

Thousands were expected to greet the returning Irish team at Dublin airport on Sunday.

By late Saturday night, pubs in central Dublin were still packed with customers in high spirits.

"It's phenomenal," patron Peter Casey bellowed over the phone at Paddy Collins pub in Dublin's Ballsbridge neighborhood, amid a roar of cheers that nearly drowned out his voice.

"Sixty-one years waiting for this, and we're absolutely over the mill," he said. "The recession is gone."

The owner of the Paddy Collins pub, Niall Lawless, said the bar was still covered with white and green decorations from St. Patrick's Day when the Irish edged out the win.

"It's was one of those once-in-a-lifetime experiences," he said, shouting over celebrations that spilled out onto the street.

"We're going through a recession and these boys have given the country a boost," he said. "It's a real boost for all the doom gloom we've been experiencing."

The revelry even reached across "the pond," where Irish-Americans were basking in the win.

"We followed it on the Internet," Barbara Magee told CNN from her home outside Boston, Massachusetts.

"Friends of mine just started texting me when [the Irish] won," she said. "We have friends that live in Wales, and we're going to call them later tonight with our condolences."

Her husband, Conor Magee, was celebrating at a pub amid a "sea of green."

"Everyone was hugging and jumping around," he said, still breathing heavy into the phone from the exertion of the celebration. "Don't know if I'll be alive for the next one," he said.