(CNN) -- South Africa will stage the 2009 Indian Premier League after officials decided to move the Twenty20 tournament to a neutral venue because of security fears. 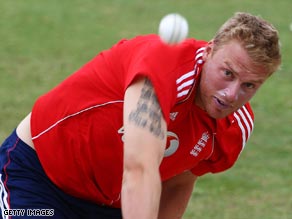 England star Andrew Flintoff is due to make his first appearance in the IPL next month.

England was the alternative choice for the highly-lucrative event, but IPL chairman Lalit Modi confirmed South Africa as hosts at a press conference on Tuesday.

Modi said after the meeting: "We are very happy to confirm that South Africa will host the 2009 DLF Indian Premier League tournament.

"We would like to thank Cricket South Africa very much for the support they have given us over the past few days, which has helped us to come to this decision.

"Both these factors weighed heavily in South Africa's favor, and we look forward to a successful and exciting tournament being held at venues throughout South Africa."

Majola said: "CSA is delighted to accept the invitation from Mr Modi to host the 2009 DFL Indian Premier League tournament.

"This is a great compliment to both CSA and our nation to be shown this confidence in our ability to hold one of the world's top sporting events at short notice.

"The organisers can be assured that they have the full support of our CSA's structures and the South African public to stage a successful tournament.

"This event will strengthen the ties even further between South African and Indian cricket, as well as binding our nations even closer together.

"We are looking forward to hosting some of the world's best cricketers, and we can assure them they will be provided with the very best facilities to show their skills.

"Once again, our thanks go to Mr Modi and his team for choosing South Africa and we will do the IPL proud."

The tournament will feature 59 matches from 18 April 2009, and fixtures will be announced in due course.

The English Cricket Board had hoped Modi would travel to London for talks with chief executive David Collier before a decision was made.

The Board of Control for Cricket (BCCI) in India announced Sunday that it was shifting the Indian Premier League (IPL) out of the country because the tournament would coincide with general elections.

BCCI president Shashank Manohar said the government had indicated it could not guarantee security for the competition.

The IPL had already increased spending on security 10-fold on last year's inaugural tournament, which featured the world's leading cricketers playing for eight franchises in the Twenty20 format, with fears heightened following the deadly attacks in Mumbai last November and this month's targeting of the Sri Lankan cricket side in neighboring Pakistan.

Watch a report on the security concerns »

The IPL is one of sport's richest tournaments. The BCCI made $1.75 billion from 10-year TV rights, promotions and franchise deals even before a match was played in last year's opening competition. In India, the estimated television audience was 200 million people.

There are now nine players on contracts worth more than $1 million a year, with England stars Kevin Pietersen and Andrew Flintoff commanding the highest fee -- $1.55 million each.