Blind sailors compete against the odds in world championship

LONDON, England (CNN) -- Without seeing the water, the weather, or even his own boat, Dick Lancaster steered a 25-foot yacht to a silver medal at a sailing world championships this month. 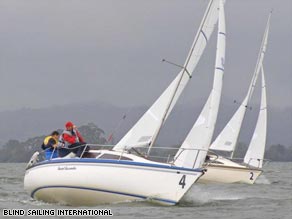 Crews from Italy and Australia do battle in the recent Blind Sailing World Championships in New Zealand.

The New Zealander, who gradually lost sight until he became completely blind in the last couple of years, is also the chairman of Blind Sailing New Zealand.

Lancaster told CNN that sailing for the blind and visually-impaired is growing around the world. There is also hope that the sport may get its own category at the Paralympics.

"This year's event was as big as it has ever been. We had ten countries represented and most countries sent three teams."

Attendance would have been stronger had it not been for the challenging financial climate, which had prevented some nations from traveling to New Zealand for the event, he said.

Since the inaugural world championships in 1992, events have been held in Australia, the U.S., the United Kingdom, Italy and New Zealand.

At this world championships Lancaster was sailing in the "B1" class which is for the blind, while the "B2" and "B3" classes have lesser levels of visual impairment.

So, how exactly do blind and visually-impaired people manage to sail a large racing boat?

Lancaster explained that it is not as difficult as it may sound.

"We sail with a four man crew. There is a blind person at the helm and another blind person on the mainsheet. There is also a sighted tactician, who's not allowed to touch anything, and a fourth sighted crew member.

"The most challenging thing for me has been the last few years when I have gone from B2 to B1 (blind). You have to rely on your feel a lot more now,"he said.

Even though he is unable to see, Lancaster says it's not impossible.

"There are plenty of people who sail at night-time -- so it's not too difficult."

Contrary what many may presume, Lancaster said there were not too many crashes during races, though some areas of the course were challenging.

"At the start line and when you're going around a mark it gets pretty exciting at times. There's inevitably a few prangs on the water -- but I don't know if there's any more than in other sailing."

New Zealand won the overall team trophy at the event.