(CNN) -- Gebre-egziabher Gebremariam kept the men's individual title at the world cross country championships in Ethiopia after winning a sprint finish to Saturday's championship in Jordan. 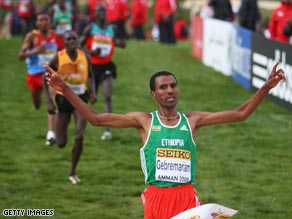 Gebremariam took gold ahead of Ugandan Moses Kipsiro and Zersenay Tadese of Eritrea after a testing 12 kilometers over a course at the Bisharat Golf Course in Amman.

He crossed the finishing line in 35 minutes and two seconds, two seconds clear of Kipsiro and 2007 champion Tadese who had the same time, putting daylight between himself and the other medal winners on a sharp rise before the run in to the finish.

Gebremariam succeeds compatriot Kenenisa Bekele as the winner of what is rated as the most competitive race in distance running.

Six-time champion Bekele, the world record holder for 5,000 and 10,000 meters, was forced to sit out the race through injury.

Kenya's main hopes for the individual title faded in the closing stages but they still retained the coveted team title from Ethiopia.

Masai, who also finished runner-up last year in Edinburgh, could not hold off Kiplagat in the race for the line.

Last year's winner Tirunesh Dibaba did not race through injury as Kenya took the team title. Dibaba's sister Genzebe won the women's junior race which was held over six kilometers and is a recognized breeding ground for future world and Olympic champions with Britain's Paula Radcliffe a past winner.

Ayele Abshero of Ethiopia won the junior men's race as African runners enjoyed a clean sweep of the major titles.