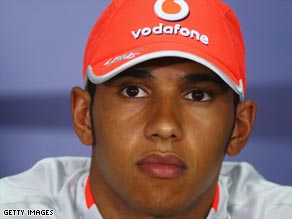 Hamilton has been disqualified from the Australian GP after presenting "misleading" evidence to stewards.

The McLaren driver and Toyota's Jarno Trulli were called to an FIA hearing in Malaysia -- the site of this weekend's grand prix -- on Thursday to discuss an incident during Sunday's race.

Trulli finished third at Melbourne's Albert Park, only to later be handed a 25-second penalty by race stewards which relegated him to 12th position and saw Hamilton lifted into third.

However, following Thursday's hearing, Trulli has been reinstated in third position.

McLaren had complained that veteran Italian Trulli had illegally passed Hamilton under yellow flags following an accident late on involving Red Bull's Sebastian Vettel and Robert Kubica in his BMW Sauber -- who were running second and third at the time.

Trulli had decided not to appeal the original decision but the FIA, the sport's governing body, said it had received new information and pressed ahead with a second hearing.

"The stewards, having considered the new elements presented to them from the 2009 Australian Grand Prix, consider that Lewis Hamilton, and the Vodafone McLaren Mercedes team, acted in a manner prejudicial to the conduct of the event by providing evidence deliberately misleading to the stewards at the hearing on Sunday 29th March 2009," the FIA said in a statement.

It said Hamilton and McLaren had violated its rules and retrospectively disqualified him from the race.

Meanwhile, Trulli believes justice has been served after Thursday's decision. "I am happy because I wanted some justice and I got it," he told PA Sport.

"I am happy for myself and the team and I have to thank the FIA because it does not happen very often they reconsider something.

"It must have been really hard for them, but they had common sense to really try and understand what was going on. I have always been honest and it has paid off."