LONDON, England (CNN) -- A British man who has just claimed the world land sailing speed record is now planning to better his speed -- on ice. 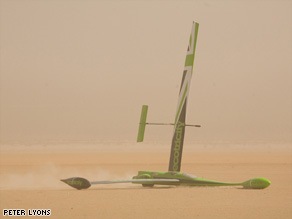 Using just wind power, Richard Jenkins drove his vehicle, the Greenbird, to 202 km/hour (126 miles/hour) in late March on the dry Lake Ivanpah near the border of California and Nevada in the western United States.

Greenbird is a carbon fibre composite craft -- described by the makers on their Web site as "part airplane, part sailboat and part Formula One car" -- that uses solid sails to harness the power of the wind.

It weighs 600 kg and is able to travel up to four or five times greater than the speed of the wind -- at which point the downward force of the wings increases the craft's weight to nearly a ton. The only metal in the structure is in the wing bearings and the wheel.

Jenkins told CNN the record came after the team, which is sponsored by UK-based green electricity company Ecotricity, made gains in all aspects of the vehicle's design.

"It's a real mixture of everything -- all of the margins are so tight you have to make a little gain in every place."

The technologically advanced Greenbird works by using the flow of air over its vertical sail to push it forward. It transfers the side force of wind into downward energy to keep it from taking off -- a similar concept to that used in Formula One race cars.

Greenbird's record speed defeated the previous record set by American Bob Schumacher in 1999. Schumacher, in what he described as a "boat" called the "Iron Duck," managed 116 miles per hour.

View a photo gallery of the successful speed record attempt »

Jenkins told CNN he had been working towards the record for about 10 years and was ecstatic to have managed the feat.

"We had been working on this for a long time. It started when I was at university...so it was great to finally achieve the record."

The 32-year-old said bad weather and attracting sponsorship had been the main challenges in preparing to set the record.

"You have to be very lucky for the weather to be right at the right time. For years I thought we were going to be unlucky."

With the land sailing record under his belt, Jenkins now plans to return to work on his Greenbird ice sailing craft -- which he feels has the potential to be even quicker than the Greenbird land racer.

"Theoretically it should be a lot faster, but currently ice yachts are not as quick as land yachts. We are not completely sure why."

Jenkins said his next ice sailing attempt would likely take place in December this year on Canyon Ferry Lake in Montana, where the ice is large and secure enough for the vehicle.

It is also important to make attempts before snow falls on the ice, creating more drag, Jenkins added.

"Depending on when you go, the ice can be a lot more unstable. There is the risk that you could go through a water-hole into the ice. We try not to think about it," Jenkins said.

For more about the Greenbird land and ice craft, go to Greenbird.co.uk