LONDON, England (CNN) -- Do you know your "futtock" from your "baggywrinkle?" 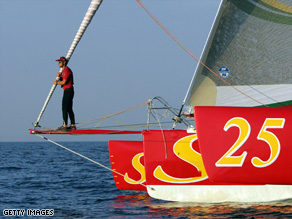 A sailor stands on the "widow-maker" -- or bowsprit of his yacht.

Don't be concerned if you don't, as they are both relatively obscure terms used in sailing.

It is a sport littered with odd words and phrases and MainSail has put together a list of 10 of the weirdest below.

They are bound to raise a smile and will certainly make you more knowledgeable on the water -- who knows, you could even impress friends and colleagues with your mastery of obscure nautical terminology.

Scuttlebutt
The scuttlebutt is a cask on a ship containing the vessel's drinking water. It was named this as the container was traditionally a small barrel, the so-called "butt," which had been "scuttled" -- had a hole made in it -- so water could be accessed. As sailors would often gather around the scuttlebutt to chat, the word has also taken on a slang meaning of rumor or gossip.

Rollocks
A commonly used spelling for "rowlocks." These are the spaces cut into the vessel or small clasps raised up from the side of smaller boats that are used to rest oars when the boat is under paddle.

Are there any other nautical words you'd like to add? Tell us in the Sound Off box below.

Poop deck
A poop deck is a deck at the rear of a ship, generally formed by the roof of a cabin. If a wave washes over this deck from behind the vessel, it is said to be "pooped."

Widow-maker
This is a colloquial term for a boat's bowsprit -- the long pole, or "spar," extending from the bow used by sailors to tend to sails. The treacherous bowsprit earned its name and reputation from of the number of sailors who have lost their lives falling from the it.

This strange-sounding gem is simply a soft covering for ropes aboard yachts that prevent chafing of the sails. Where ropes and lines come into contact with sails there is serious potential for damage to the sail due to the abrasive nature of most rigging.

Mainsheet
The mainsheet is a rope or line attached to the boom that allows the sailor to control the speed of a boat by adjusting the main sail.

Bilge
The bilge is the lowest part of the interior of a ship. It marks the spot at the inside-bottom of the hull, below any floorboards, and it sits below the water-line.

Futtock
Futtocks are the curved timbers used to form the interior ribs on the hulls of wooden ships.

Cat-head
The cat-head is a large wooden beam that extends from vessels at a 45 degree angle and is used to assist in raising and lowering the anchor. Many cat-heads have had the faces of lions or other large cats carved into them -- however, it's not known if this gave the cat-head its name, or came as a result of the name.

Escutcheon
The place on the stern of a ship where the boat's name is written is known as the escutcheon.