(CNN) -- World number one Rafael Nadal continues to prove unbeatable on his favorite clay-court surface, as he won his fifth Barcelona Open title in a row with a straight sets victory over fellow-Spaniard David Ferrer on Sunday. 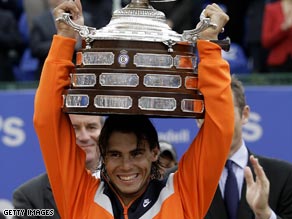 Rafael Nadal lifts the massive Barcelona Open trophy for the fifth year in a row after his win over David Ferrer.

The 22-year-old Nadal, who last week secured his fifth Monte Carlo title in succession, repeated that feat on home soil by winning 6-2 7-5 in a repeat of the 2008 final.

The victory gave Nadal his 35th career title (24 of them coming on clay) and meant the Barcelona tournament was won by a home player for a seventh straight year.

"I could have never have imagined that I would win here for a fifth time," a beaming Nadal said after the match.

"Congratulations to David also. Even if it was impossible for him to win today, he had a great tournament. For me, this is much more than a dream," he added.

Nadal will have no time to celebrate as he heads directly for the Rome Masters which begins on Monday. Last year, an obviously exhausted Nadal lost in his opening match to compatriot Juan Carlos Ferrero.