Formula One poised to increase to 26 teams

(CNN) -- Formula One is poised to become a 26-car championship next season for which a $60 million budget cap has been imposed. 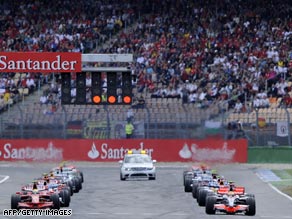 The F1 grid could increase by six cars to 26 next season after a budget cap was imposed.

Following Wednesday's meeting of the World Motor Sports Council in Paris, it was agreed the maximum number of cars permitted to enter would be increased to 26, two for each team.

After announcing $45 million cap in mid-March, the WMSC has now increased that figure by a further $15 million with the formation of a new costs commission to police the regulation.

The sport has not seen 26 cars on the grid for 15 years, with the budget cap designed to encourage new entrants.

The World Council, spearheaded by FIA president Max Mosley and F1 supremo Bernie Ecclestone, feel, by raising the bar, it will not deter prospective new teams from signing up.

The additional $15 million also allows the current teams a further degree of leeway, although they may still feel it does not go far enough.

Teams, though, will still have freedom of choice as to whether to be governed by the cap. However, those that opt out face certain restrictions. Any team operating within the budget will be allowed to use movable front and rear wings and, most crucially, an engine not subject to a rev limit.

Those teams will also be allowed unlimited out-of-season track testing, with no restrictions on the scale and speed of wind-tunnel testing.

Any team wishing to compete in next year's championship must notify the FIA between May 22 to 29 and state whether they wish to compete under the cost-cap regulations.