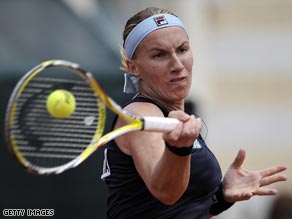 Kuznetsova claimed her first tournament win for two years with victory in the Stuttgart final.

Kuznetsova took 80 minutes to defeat fellow-Russian Safina, who was playing in her first tournament since being installed at the top of the world rankings, 6-4 6-3.

Kuznetsova, who beat another Russian -- Olympic champion and second seed Elena Dementieva in the semifinals -- needed only 43 minutes to take the opening set and had a match point at 5-2 in the second set.

Although, Safina saved that, Kuznetsova took the title on her second match point to end a dismal run of losing her last six WTA Tour finals.