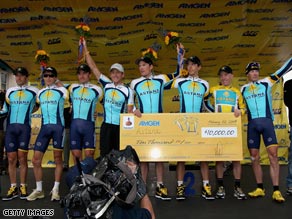 Armstrong (fourth left) and his team-mates could be riding for a new sponsor if the team's money problems continue.

The team, which apart from Armstrong has a number of high-profile riders including current Giro d'Italia and Vuelta Espana champion Alberto Contador and top American Levi Leipheimer, is financially supported by a consortium of Kazakh-based companies.

However, with the global recession continuing to bite, the Kazakh cycling federation has already been forced to overcome a shortfall in riders' salaries this year.

This comes amid reports that the team's sponsors are reluctant to commit further, a situation that could lead to the UCI to withdraw Astana's professional racing licence.

UCI president Pat McQuaid will travel to the city of Astana, the Kazakhstan capital, later this month to discuss the matter and try to find a resolution.

"He (McQuaid) will take the opportunity to talk about that, because we are concerned," Enrico Carpani, the UCI's chief press officer, told Press Association Sport.

Astana are among the starters for this year's Giro, which begins in Venice on Saturday, but doubts remain whether the team will appear in the same guise for the 2009 Tour de France, which begins in Monaco on July 4.

A team spokesman was adamant the issue can be resolved. Philippe Maertens told Press Association Sport. "For the moment, there is no problem. If the sponsors pay again, nothing is lost."

If the sponsors fail to stump up the required revenue, team chief Johann Bruyneel, who mentored Armstrong to all seven of his Tour de France victories, could have a number of options which should see them able to continue, including finding another title sponsor.

Cancer survivor Armstrong returned to cycling this year, after a three-year absence, to promote his Livestrong campaign and the battle against the illness.

The 37-year-old American is immune to Astana's financial plight as he does not receive a salary from the team, relying on his long-term sponsors such as Nike, Oakley and Trek.

Because of Armstrong's unique situation within the team there is also the possibility that the American could take over sponsorship himself, to further promote the Lovestrong campaign, or have the necessary contacts to bring in another major sponsor.