Why do tennis greats struggle at the French Open?

LONDON, England (CNN) -- Pete Sampras and Roger Federer are two of the modern era's greatest tennis players. Between them, they have won a staggering 27 Grand Slam singles titles -- and yet, neither player has ever won the French Open. 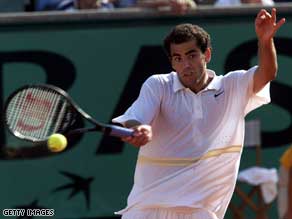 That legendary players like Sampras and Federer have somehow failed to win at Les Internationaux de France de Roland Garros is just one of the reasons why this Grand Slam tournament holds such a special place on the tennis calendar.

The French Open is notably the only Grand Slam event contested on clay -- a factor that separates it from the other three majors, and more than anything else defines the tournament.

The layers of crushed brick that constitute the orange-red clay courts of Roland Garros are what brought Sampras -- and still bring Federer -- so much grief. Fellow greats John McEnroe, Boris Becker and Stefan Edberg also failed to win the coveted title.

The reason clay may have affected the natural games of these players is because the surface slows the ball and produces a slightly higher, loopier bounce than grass or hard courts. This means the high-power serve of someone like Sampras is negated, opening the way for players with a different style of game.

To this extent, the French Open helped create the legend of one of the finest players of all time -- Swedish star Bjorn Borg. Borg won a record six times at Roland Garros. He also won five Wimbledon titles -- but never managed an Australian or U.S. Open crown, both tournaments fought out on hard courts.

Describing what makes the French Open so special in an rare one-on-one interview with Indian Web site Rediff.com in 2001, Borg said: "It is toughest to win on clay. It is easily the most draining, the toughest Slam."

Offering advice to Sampras, who was at the time still playing for a French Open title, Borg added, "I would advise him to concentrate on mental strength, to build it up, to hold that strength over the course of the fortnight.

"Along with that, you also need a great deal of physical strength. And most importantly, you have to believe that you can win on clay."

It is not surprising therefore, that Spanish players -- who are generally well-accustomed to playing on clay -- have come to dominate the tournament in recent years. Nine of the last 12 French Open finals have featured at least one Spaniard.

The tournament is still held in high regard by France's population. A record crowd of more than 450,000 people came to watch the action at Roland Garros in 2008, and according to the tournament organizers, it is the most-watched French event in the world.

First played in 1891 as a national tournament, it became an international event in 1925, and in 1928 moved to the Roland Garros facility at Porte d'Auteuil in Paris, where it remains today.

Its chosen title, Roland Garros, was the name of a legendary World War One French aviator, who had frequented the tennis venue when he studied in Paris.

The 2009 edition of what Borg called "the toughest Slam" promises to be just as entertaining and draining as those that have gone before.

World number one Rafael Nadal is searching for his fifth consecutive title to usurp Borg's record of four in a row, which he currently equals. Meanwhile, world number two Roger Federer is looking to avenge three consecutive final defeats at the hands of Nadal.

In the women's draw, the tournament appears wide open. Last year's champion Ana Ivanovic has slipped to eighth in the world rankings, while the top four ranked players have only one French Open title between them.