(CNN) -- The British and Irish Lions began their tour of South Africa with a whimper on Saturday, needing a late fightback to avoid an embarrassing defeat to the Royal XV at Rustenburg. 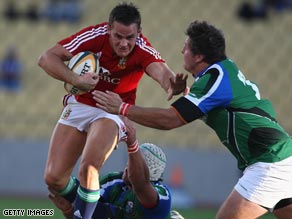 Lions full-back Lee Byrne breaks through a tackle during his side's tour opener in Rustenberg.

Ian McGeechan's side rallied from 25-13 down with 14 minutes to play, eventually winning 37-25 against a selection side who had never played together before the match.

"I think it's a big wake-up call for us," captain Paul O'Connell told Sky Sports 1. "We've been working hard on getting used to playing with each other but you have to remember what you need to bring to a rugby match as well -- the physicality, the attention to detail.

"That's hard when you're just coming together as a team but we're trying to get beyond that now and focus and improve on Wednesday (against the Golden Lions). We've all had bad games, we've all gone out there and had nightmares, but we've just got to put it behind us. We've got a good bunch of lads here and I think the boys will be fine."

However, McGeechan surprisingly took some positives from the match.

"There were a lot of errors in the first half which stopped us getting some fluency," he said. "But in the second half we got stronger.

"I was very pleased with a lot of the forward play. We've just got to be a little bit more patient, but it was a good start considering it was our first game. We made a lot of unforced errors when we were in possession, which you would expect to come out of our game the longer we are together.

"You've got to give players time and you have to realize how big an occasion it is when you put a Lions shirt on for the first time."

McGeechan's assistant Shaun Edwards, though, was disappointed by the performance, which saw his side trail 18-3 at one stage.

"We were a little bit shocked in the first half that they went into such a commanding lead," Edwards told Sky Sports 1. "We've got a few areas to work on over next few weeks but it's all building up to the Test matches, and in the end it's the Test matches that really matter.

"In some cases, you've got lads playing their first ever game for the Lions and nerves do come into that -- so next time we'll have no excuse."

In front of a sparse crowd of 12,532 in a 42,000-capacity stadium, the Lions struggled for long periods during an inept first-half display.

Royal XV skipper Willhelm Koch stretched out for a close-range try before hooker Rayno Barnes rounded off an impressive driving maul to give their side the 15-point margin before O'Gara's inside pass set up wing Tommy Bowe to cross.

O'Gara further reduced the deficit with his second penalty after Royal XV wing Egon Seconds was called back with a certain intercept try looming.

Prop Bees Roux ploughed over to put the home side further ahead, with substitute Riaan Viljoen converting from the touchline.

However, Lions full-back Lee Byrne conjured up a fine solo try which O'Gara converted before made six substitutions in quick succession.

The Royal XV held out until four minutes from the end, when Jones put the Lions ahead with O'Gara again adding the extras before sealing victory with a last-gasp seven-pointer.