LONDON, England (CNN) -- Rafael Nadal's shock French Open exit at the hands of a player ranked outside the top 20 is already attracting suggestions that it may be the biggest upset in tennis history. 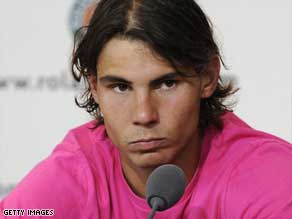 Nadal, the world number one had never lost a game at Roland Garros, winning the previous four titles in a row. However, Sweden's Robin Soderling proved too good for the "King of Clay," beating him 6-2 6-7 6-4 7-6.

The official French Open Web site called it "one of the greatest upsets in Grand Slam history," while other news outlets have rushed to praise the Swede for the "game of his life."

Undoubtedly a massive upset, Nadal's loss also raises the question of what have been the biggest men's Grand Slam upsets in tennis history. Is this is the biggest?

Below, in no particular order, are ten of the most shocking.What do you think the biggest upset in recent tennis history is? Tell us in the Sound Off box below.

1. Robin Soderling beats Rafael Nadal, French Open 2009
Spain's clay master was unbeaten at Roland Garros and looking for his fifth title in a row when he was shocked by the 23rd seed Swedish player. Soderling was too good for Nadal, and deserved the win.

2. Michael Chang beats Lendl and Edberg, French Open 1989
American Michael Chang etched his name in history by winning the 1989 French Open aged just 17 years and three months. He beat legends Ivan Lendl and Stefan Edberg (in an epic five set final) to win the event and he is still the youngest winner of a Grand Slam.

3. George Bastl beats Pete Sampras, Wimbledon 2002
Swiss player Bastl was ranked 145 in the world when he took on the seven-time champion of Wimbledon, Pete Sampras. Bastl, who only got into the tournament as a lucky loser after failing to qualify, beat the American in five sets.

4. Mark Edmondson wins the 1976 Australian Open
The Australian only ever won one Grand Slam event, and he beat defending champion John Newcombe in the final to do it. The most remarkable point however, was that he was ranked 212th in the world when he did it. He remains the lowest-ranked player to win a Grand Slam title.

5. Goran Ivanisevic wins 2001 Wimbledon
Left-handed Ivanisevic had lost the Wimbledon final three times before he finally won it in 2001. The eventual victory was a near-miracle, as he had only entered the tournament as a wild card. Ranked outside the top 100 at the time, he became the lowest-ranked player and only wild card to win Wimbledon.

6. Mats Wilander wins the 1982 French Open
The young Swede shocked the tennis world when at 17 years of age he beat the second, third, fourth and fifth seeds at Roland Garros to win the tournament. He was unseeded for the event.

7. Richard Krajicek beats Pete Sampras, Wimbledon 1996
Krajicek surprised everyone when he became the first Dutchman to win Wimbledon in 1996, but the biggest upset had come when he defeated Pete Sampras in the quarter-final. His win was Sampras' only loss at the grass tournament between 1993 and 2001.

8. Gustavo Kuerten wins the 1997 French Open
It's no surprise that "Guga" was a Roland Garros favorite. When he won the 1997 tournament he was ranked 66th in the world and he beat three former champions along the way. He remains the third-lowest ranked Grand Slam champion.

9. Lleyton Hewitt beats Andre Agassi while ranked #550
The Australian went on to win his first ATP tour title after beating Agassi in the semi-final of the Adelaide International. The win over former world number one Agassi was remarkable given that he was ranked at 550th and only 16 years old.

10. Vladimir Voltchkov makes 2000 Wimbledon semi-final
The Belarussian was ranked 237 when he managed to make it through to the semi-finals of Wimbledon -- becoming the lowest-ranked player to ever make the last four at the London tournament.