(CNN) -- Serena Williams rolled into the second week of the French Open with a crushing victory over Aleksandra Wozniak to reach the quarterfinals on Monday. 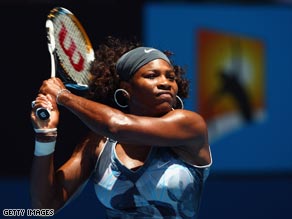 Serena returned to her imperious best against the unfortunate Wozniak.

The second seed has been in stuttering form in the early rounds, but extended her grand slam winning streak to 28 with a 6-1 6-2 victory over the Canadian in their fourth round match.

Serena had endured a coughing fit and made contorversial accusations of cheating after her three-set victory over Maria Jose Martinez Sanchez on Saturday, but this was a 53-minute stroll.

The world number two came into the tournament off the back of three straight defeats as she struggled with injury, but is now firmly on course for a hat-trick of grand slams having won last year's U.S. Open and the Australian Open in January.

Williams, who is seeking an 11th grand slam title, will next play seventh-seeded Svetlana Kuznetsova of Russia.

Williams, who saw her sister Venus go down to a shock defeat in the first week, is seeking her second French Open title.

She beat Venus in the 2002 final and knows that the real challenge starts now.

This is when everything counts, you know," she told the offiicial tournament Web site www.rolandgarros.com.

"I have to pick up my level and play again a really good, strong match, especially playing somebody like Svetlana who is a great clay-court player and who moves extremely well and doesn't do anything bad."

Jankovic is a two-time semifinalist at Roland Garros, but had no answer to Cirstea who closed out a thrilling fourth round match on her third match point.